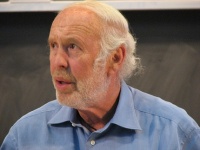 Jim Simons, who is one of the world's most successful hedge-fund managers, encouraged Stony Brook to invest with Mr. Madoff while Mr. Simons was chairman of the Stony Brook Foundation, which manages the University's endowment.

The Stony Brook foundation investment committee approved an initial allocation of $500,000 in 1991, but now the college is facing a $5.5 million loss from Madoff fraud. By 2004, it had invested about $8 million with Bernard Madoff.

"The loss is embarrassing and upsetting," says Mr. Frey. A Stony Brook University spokeswoman says the collapse of Mr. Madoff's firm in an alleged Ponzi scheme will have only a "slight" impact on scholarships, research and academic support.

When Mr. Madoff was arrested, reportedly Simons told Stony Brook committee members that he felt "lousy" about the loss.

It is shocking that Simons, one of the world's most savvy investors, missed this fraud for many years. However, the Journal reported by the early 2000s, Simons discussed his concerns about a lack of transparency at Madoff's firm and the possibility that his stellar returns might not be sustainable. Also, the foundation couldn't get answers to basic questions, such as how much money Madoff managed.

In 2004, the Stony Brook Foundation pulled $3.5 million of its roughly $8 million from Madoff's firm. Simons did urge Stony Brook to pull out all of its money, but other members of the foundation's board disagreed.

"It was at Jim's insistence that we took the position down," says Mr. Frey. It isn't clear exactly what bothered Simons, but internal SEC documents show emails between Renaissance employees around the same time Simons expressed worries about Mr. Madoff. "We at Renaissance have totally independent evidence that Madoff's executions are highly unusual," one employee wrote. The SEC, which got the emails during a routine exam of the hedge-fund firm, declined to comment to the Wall Street Journal.

Stony Brook's initial stake was put in a Madoff-managed account at Cohmad Securities. In approving the investment, the committee relied largely on Mr. Simons, they said. The committee was "counting on the fact that Jim looked at" and had "monitored" how the investment performed, according to The Journal.

Mr. Simons didn't put any of his own wealth in Madoff funds, but two of Mr. Simons's family foundations invested a small part of their portfolios with Mr. Madoff, according to the Journal.