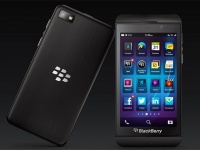 Shares of BlackBerry (Nasdaq: BBRY) are beboppin' higher Monday morning following word from the company that Z10 sales might have been better than expected.

CEO Thorsten Heins commented to German news source Frankfurter Allgemeine Zeitung that the Waterloo, Ontario-based mobile device maker was needing to increase production to keep up with demand. Heins didn't issue specific figures for Z10 sales, only saying the company was "surprised by the good reaction."

The Z10 runs on BlackBerry's BB10 operating system, which has seen its fair share of delays and speculation ahead of the January 30, 2013, launch. Analysts have been largely positive of the BB10, with most agreeing that initial sales figures have been positive.

Shares of BlackBerry are up about 3.5 percent into the open.