A Big Grizzly Comes For The Bulls 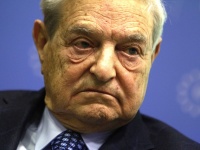 The WSJ reported overnight that George Soros has come out of semi-retirement to cash in on what he sees as "coming economic troubles". Recently, the $30 billion Soros Fund Management LLC, sold equities to buy gold and shares of gold miners, in anticipation of widespread economic weakness. Essentially, the 85 year old man who broke the Pound âon Black Wednesday (September 16, 1992) is back in the game.

Part of the reason for his return may be linked to the 2015 promotion of Ted Burdick to chief investment officer after former head, Scott Bissent left to open his own fund. Mr. Burdick's background comes from distressed debt, arbitrage and other types of trading, rather than macro investing which has been Mr. Soros's specialty.

It remains unclear if he stepped back into the game because he sees opportunity or fears loss, either way it seems he expects rough waters ahead and wants a steady hand on the tiller.