VANCOUVER, British Columbia, Feb. 02, 2021 (GLOBE NEWSWIRE) -- Serengeti Resources Inc. (SIR: TSX-V)Â ("Serengeti" or "the Company") is pleased to report the final batch of assay results from the 2020 drilling campaign completed at the Kwanika Project in north-central BC. A total of 4,350 metres were drilled in 9 holes testing a number of exploration targets and resource expansion opportunities. The first batch of results were reported on December 16th, 2020. The advanced resource-stage Kwanika project is ~26,000 hectares, held by Kwanika Copper Corporation (KCC)*, and is located in the Quesnel Trough of British Columbia which hosts numerous porphyry copper-gold deposits.

âThe 2020 drilling program at Kwanika was a success. K-202 from the current release, combined with previously released K-197, demonstrates that the Central Zone remains open for expansion towards the south along the controlling Central Fault into an area of very sparse drilling. Earlier released hole, K-198 intersected two substantial intervals of well above deposit average grade, demonstrating the potential for delineation of higher grade domains within the known resource and drilling to the north indicates that the mineralized envelope remains open in that direction. We look forward to pusuing all of these opportunities in 2021 under the banner of a strengthened corporate entity, once the merger with Sun Metals has been approved by shareholders.â , stated David W. Moore President & CEO of Serengeti Resources.

See attached plan and drill sections or view them on the companyâs website at https://www.serengetiresources.com/projects/kwanika-2/.

Intercept lengths in the table above are not necessarily true widths given the fact that holes are being drilled at different angles through forecast mining shapes within a variably oriented mineralized body. Gold and Copper equivalents are calculated using the formulae below based on metal prices of $3.25/lb of copper, $1,600/oz of gold, $20/oz of silver and $11/lb of molybdenum, with all metal prices quoted in USD. Metal recoveries as stated in the PEA as follows; Cu 91%, Au 75%, Ag 75% have been applied to the equivalent calculations. ** End-of-hole.CuEq = Cu% + ((Augpt/31.1034*AuPrice*AuRecovery)+(Aggpt/31.1034*AgPrice*AgRecovery))/(CuPrice*CuRecovery*22.0462)AuEq = Augpt + ((Aggpt/31.1034*AgPrice*AgRecovery)+(Cu%*CuPrice*CuRecovery*22.0462))/(Augpt/31.1034*AuPrice*AuRecovery)

DDH-K-199 deviated from the planned orientation more than anticipated, intersecting propylitically altered barren diorite and granodiorite before being abandoned at 173.2m. The drill was then repositioned to drill K-200.

DDH-K-203 was an exploration hole drilled to test a Z-Axis Tipper Electromagnetic (ZTEM) and coincident Ah-horizon soil geochemical anomaly southwest of the Central Zone along the Pinchi Fault. The hole intersected interbedded mafic volcanics and calcareous sediments of the Cache Creek terrane which explain the geophysical response. The hole was abandoned at 179.1 metres and no samples were submitted to the laboratory for analysis.

DDH-K-204 was drilled to follow up on encouraging results from K-196, including two mineralized horizons. K-204 intersected potassically altered diorite and monzodiorite hosting pyrite-chalcopyrite mineralization similar to the upper mineralized horizon in K-196 before entering a barren gabbroic-granitic dyke swarm showing complex cross-cutting relationships. The dyke swarm may represent a high-temperature intrusive system core possibly related to Central Zone mineralization. When coupled with mineralized intercepts from prior drill holes to the west and north, this suggests a mineralized system may continue at depth toward the northwest.

*Â Â Â Serengeti sole-funded the 2020 Kwanika program. As a consequence, the Companyâs ownership of KCC increased to ~ 67%, with POSCO International Corp. holding ~33%.

During June 2020, Serengeti completed a 2-week grid mapping and sampling program at Top Cat to follow up on encouraging results from 2019 including 1.39% Cu, 0.69 g/t Au and 1.38 g/t Pd (see press release dated January 19, 2020) at the Nova area. A total of 92 rock samples, 409 Ah soil samples and 55 stream sediment samples were collected over the area followed by a reconnaissance induced-polarization (âIPâ) survey totaling 15 line-km in four lines over areas of interest. As a result of the work, a number of alkalic porphyry Cu-Au targets were identified characterized by polymetallic soil and coincident IP anomalies within intrusive rocks of the Duckling Creek suite. The Nova area is now considered drill-ready.

Top Cat is under option from the Pinchi Group (see Serengeti press release dated July 23rd, 2019) and covers approximately 26,000 hectares in north-central BC. The property adjoins Sun Metalsâ wholly-owned 39,000 hectare Lorraine property (see Sun Metals press release dated November 26, 2020), which hosts a historical NI43-101 mineral resource. Lorraine has been the focus of past academic research and hosts a number of alkalic porphyry Cu-Au prospects and occurrences, and the overall prospective trend continues onto the Top Cat property. Top Cat and Lorraine may be integrated as a result of the proposed merger between Serengeti and Sun Metals, announced on November 30th, 2020. A comprehensive historical data compilation and targeting exercise is currently underway for the Top Cat â Lorraine tenures, and the Company is planning a significant target development program in 2021 for the combined properties to identify targets for future drilling.

The field and analytical programs described herein were supervised by Serengeti Resources staff and the technical information in this news release has been prepared in accordance with Canadian regulatory requirements as set out in National Instrument 43-101, and reviewed by the companyâs qualified person, Quinn Harper, P.Geo., Chief Geologist of Serengeti Resources, who has supervised the preparation of, and approved the scientific and technical information in this news release.

ON BEHALF OF THE BOARD

Serengeti is a mineral exploration company managed by an experienced team of professionals with a solid track record of exploration success.

Serengeti and Sun Metals Corp announced on November 30th, 2020Â that they have entered into a definitive arrangement agreementÂ pursuant to which Serengeti will acquire all of the issued and outstanding shares of Sun Metals Corp. The combined company will result inÂ a diversified copper-gold developer with a large pipeline of projects, in one of Canadaâs most prolific porphyry mining camps in North-Central BC, bringing together exploration, development and operational synergies at multiple projects along with ongoing resource expansion opportunities and new discovery potential.Â  Additional information can be found on the Companyâs website atÂ www.serengetiresources.com.

Neither the TSX Venture Exchange nor its Regulation Services Provider accepts responsibility for the adequacy or accuracy of this release.

Photos accompanying this announcement are available at 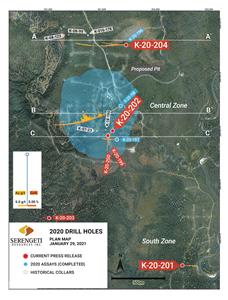 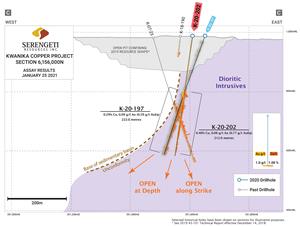 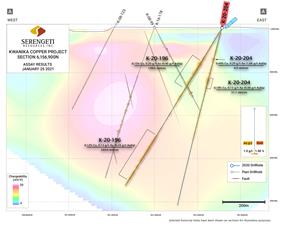