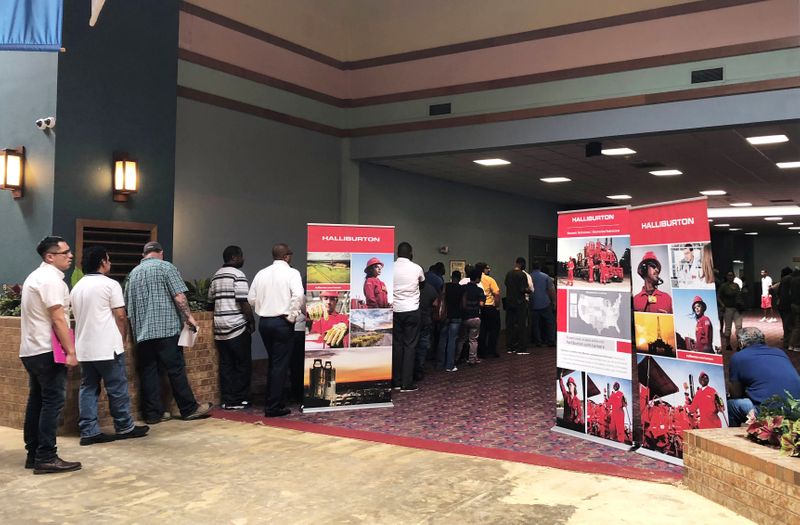 WASHINGTON (Reuters) - U.S. private payrolls rebounded more than expected in January, suggesting the labor market recovery was back on track after the economy shed jobs in December as soaring COVID-19 infections hurt operations in the leisure and hospitality industry.

There was also encouraging news on the embattled services sector, with other data on Wednesday showing activity racing to its highest level in nearly two years in January amid an acceleration in new orders and employment. The upbeat reports likely reflected nearly $900 billion in additional pandemic relief provided by the government in late December.

If the solid hiring is confirmed in the government's closely watched employment report on Friday, that could complicate President Joe Biden's push for a $1.9 trillion package to speed up the economic recovery, which has met with resistance from some lawmakers worried about the ballooning national debt.

Authorities have started to ease restrictions on businesses amid signs of a peak in the recent coronavirus wave, though a new strain of the virus has been reported in many states.

The ADP National Employment Report showed private payrolls increased by 174,000 jobs last month after dropping by 78,000 in December. Economists polled by Reuters had forecast private payrolls would rebound by 49,000 in January. The gains in hiring were broad, though the pace was half of the 347,000 monthly average job growth in the last six months of 2020.

The ADP report is jointly developed with Moody's Analytics.

Goods producers added 19,000 jobs in January, with employment in the construction industry rising 18,000. Manufacturing payrolls gained only 1,000. Hiring in the services sector rebounded by 156,000 jobs after falling 73,000 in December.

The leisure and hospitality industry added 35,000 jobs after shedding 79,000 positions in December.

In a separate report on Wednesday, the Institute for Supply Management (ISM) said its non-manufacturing activity index increased to a reading of 58.7 last month. That was the highest reading since February 2019 and followed 57.7 in December. The index is now above its pre-pandemic level.

A reading above 50 indicates growth in the services sector, which accounts for more than two-thirds of U.S. economic activity. Economists polled by Reuters had forecast the index at 56.8.

The survey's index of services industry employment rebounded to an 11-month high of 55.2 from 48.7 in December.

The distribution of vaccines has boosted optimism in the industry hardest hit by the pandemic because of the restrictions on businesses like restaurants and bars.

Still, the ISM noted that "various local-and state-level COVID-19 restrictions continue to negatively impact companies and industries," and that "production capacity and logistics issues continue to cause supply chain challenges."

The pandemic has shifted spending away from services to goods, with consumers staying away from other businesses and venues which attract crowds.

Consumer spending on services is about 7.5% lower than before the outbreak of the virus in the United States.

The ISM survey's measure of new orders for the services industry shot up to a six-month high of 61.8 from a reading of 58.6 in December. Backlog orders recovered, though export orders contracted as a global resurgence in the coronavirus led to renewed lockdowns in some of the United States' trade partners.

The reports were published ahead of the government's closely watched, and comprehensive, monthly employment report on Friday.

According to a Reuters poll of economists payrolls likely increased by 50,000 jobs in January after declining by 140,000 in December, the first drop in employment in eight months.

Expectations for a rebound in hiring were bolstered by a report on Monday from the Institute for Supply Management showing that manufacturers hired more workers in January, though a flare-up in COVID-19 infections caused labor shortages at factories and their suppliers.

"We project that payrolls rose by 100,000 in January but the margin of error associated with this forecast still suggests a decline in jobs is a significant possibility," said Conrad DeQuadros, senior economic advisor at Brean Capital in New York.

The economy has recouped 12.5 million of the 22.2 million jobs lost in March and April. The Congressional Budget Office estimated on Monday that employment would not return to its pre-pandemic level before 2024.