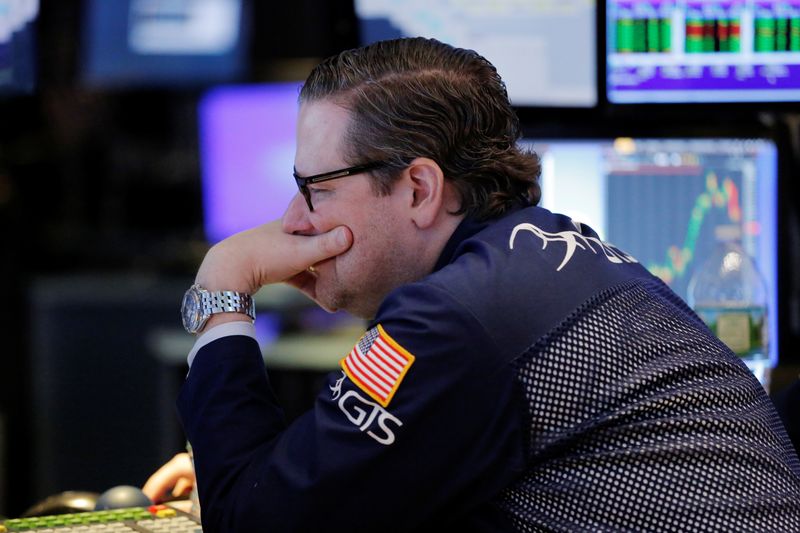 FILE PHOTO: A trader looks at screens while working on the floor of the New York Stock Exchange (NYSE) in New York, U.S., March 27, 2017. REUTERS/Lucas Jackson

NEW YORK (Reuters) - The prospect of higher U.S. Treasury yields remains a central focus of investors, even after the Federal Reserve assured markets it would keep measures in place to support growth despite expectations of a powerful economic rebound.

Fed Chair Jerome Powell on Wednesday pledged to keep rates at record lows for years to come, despite expectations of a sharp acceleration in growth and inflation this year as the COVID-19 crisis ebbs.

The dovish comments sent yields on the benchmark 10-year Treasury note, which move inversely to bond prices, down from the 13-month high touched earlier in the session to close at 1.6462%.

But they rebounded early Thursday, vaulting above 1.74% for the first time since January 2020.

Despite the increase, yields remain low by historical standards after a four-decade bull market in bonds that was accelerated by the Fedâs response to the great financial crisis more than a decade ago.

The recent rise, which has seen the 10-year climb from a low of around 0.50% in August, has also been less violent than some yield surges of the past. It took roughly seven months for 10-year Treasury yields to rise by about 120 basis points, compared with a rise of about 137 basis over a four-month period in 2013.

One factor that has grabbed investorsâ attention in the recent move has been a faster rise in yields on longer-dated bonds compared with those on shorter-dated debt, as seen in the gap between yields on two- and 10-year Treasury notes.

Yields on longer-dated bonds tend to outpace shorter-term yields when the market expects an environment of stronger growth, higher inflation or interest-rate increases by the Federal Reserve.

Right now the spread is the widest it has been since 2015.

TANTRUM MINUS THE TAPER

Investors have also been worried about a possible repeat of the âtaper tantrumâ that markets experienced in 2013, when yields jumped on expectations of a tapering of stimulus. In 2013, this occurred after then-Fed Chair Ben Bernanke told lawmakers the Fed could reduce its pace of purchases of assets that had been propping up markets.

Though Powellâs comments may have temporarily assuaged those concerns, they are likely to creep up again if burgeoning economic growth continues to fuel speculation of sooner-than-expected monetary tightening.

Higher yields have slowed a blistering rally in technology and other growth stocks that have helped lead the S&P 500 on a 80% rally from last yearâs lows.

Rising yields can be particularly harmful to tech stocks, which make up about 27% of the S&P 500 by market capitalization, as they threaten to erode the value of their longer term cash flows.

At the same time, the increase in yields have helped lift financials and some other undervalued stocks, accelerating a rotation from growth to value that has gripped markets this year.

MORE BANG FOR THE BUCK

Higher yields could also boost the attractiveness of the U.S. dollar relative to other major currencies. The dollar index, which is down about 10% from late March last year, has seen a limited boost so far. Persistently higher yields along with a rise in "real" yields - adjusted for inflation - could provide a lift to the dollar, helping the dollar index pull away further from the near 3-year low touched in January.