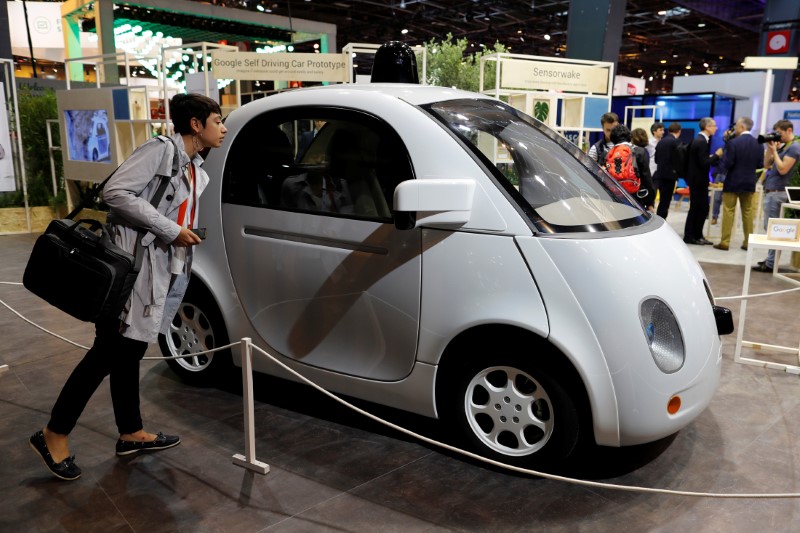 A visitor looks at a self-driving car by Google at the Viva Technology event in Paris, France, June 30, 2016. REUTERS/Benoit Tessier

Representative Robert Latta, a Republican who heads the Energy and Commerce Committee subcommittee overseeing consumer protection, said he would continue to consider changes before the full committee votes on the measure, expected next week. The full U.S. House of Representatives will not take up the bill until it reconvenes in September after the summer recess.

The measure, which would be the first significant federal legislation aimed at speeding self-driving cars to market, would require automakers to submit safety assessment reports to U.S. regulators, but would not require pre-market approval of advanced vehicle technologies.

Automakers would have to show self-driving cars "function as intended and contain fail safe features" to get exemptions from safety standards but the Transportation Department could not "condition deployment or testing of highly automated vehicles on review of safety assessment certifications," the draft measure unveiled late Monday said.

The issue has taken new urgency because road deaths in the United States rose 7.7 percent in 2015 over the previous year to 35,200, the highest annual jump since 1966. Traffic deaths climbed nearly 8 percent in the first nine months of 2016, government data showed.

Current federal motor vehicle safety rules prevent the sale of self-driving vehicles without human controls. Automakers must meet nearly 75 auto safety standards, many of which were written with the assumption that a licensed driver will be in control of the vehicle.

States could still set rules on registration, licensing, liability, insurance and safety inspections, but could not set self-driving car performance standards, under the proposal.

California state assemblyman Freddie Rodriguez questioned "why Washington would want us here in the states to not look at the safety standards â it should be up to every state."

Representative Debbie Dingell, a Democrat from Michigan, said the bill creates a "strong but flexible regulatory framework" that seeks to avoid "a patchwork" of different state rules.

Auto dealers want the final bill to clarify that the measure would not preempt state dealer franchise laws that generally bar automakers from selling vehicles directly to consumers.

Democrats praised the bipartisan proposal but said they want more changes before the full committee takes it up, including potentially adding other auto safety measures.

The Alliance of Automobile Manufacturers, a trade group, said it is "pleased that the legislation is moving forward, and expect to see areas fine-tuned in the legislation."

Separately, Republican Senator John Thune, who is working with Democrats, said Wednesday he hopes to release a draft self-driving car reform bill before the end of July.