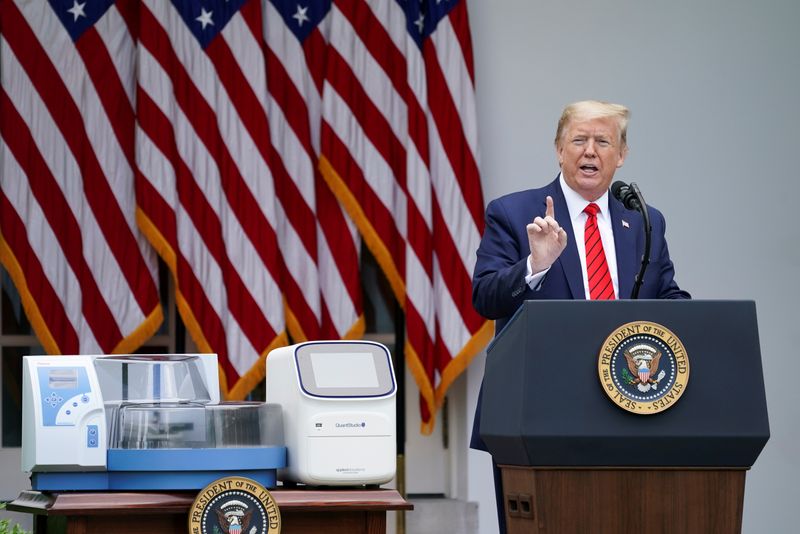 "California should let Tesla & @elonmusk open the plant, NOW. It can be done Fast & Safely!" Trump wrote on Twitter.

On Monday, Musk said production was resuming at the automakerâs sole U.S. vehicle factory, defying an order to stay closed and saying if anyone had to be arrested, it should be he.

Musk tweeted "Thank you!" in response to Trump on Tuesday.

Employee-parking lots at Tesla's factory in Fremont, California were packed with cars on Tuesday. Trucks could be seen driving in and out of the factory grounds.

At the Fremont factory's outbound logistics parking lot, where only a dozen Tesla cars were parked last week, hundreds of Tesla vehicles were seen on Tuesday.

According to a Reuters report last week, Tesla said it had begun limited operations at its Gigafactories in Nevada and New York.

The company, which on Saturday sued Alameda County, where the plant is located, over its decision that the plant should stay closed, did not comment on Trump's tweet.

Late on Monday, county health officials said they were aware Tesla had opened beyond the so-called minimum basic operations allowed during lockdown, and had notified the company it could not operate without a county-approved plan.

A county health official on Friday said the county had asked all manufacturers, including Tesla, to delay operations by at least another week to monitor infection and hospitalization rates.

Scott Haggerty, the Alameda County supervisor for the district where Tesla's factory is located, told the New York Times on Saturday that the county had been working to permit Tesla to resume operations on May 18 - the same day other U.S. automakers have been permitted to resume production in other states.

Haggerty on Tuesday accused Musk on Twitter of misrepresenting what he had told the newspaper.

Tesla on Saturday released a plan to keep workers returning to the factory safe.

The measures, which include temperature screenings, the installation of barriers to separate work areas and protective equipment for workers, are similar to those set up by Detroit-based automakers General Motors (NYSE: GM), Ford (NYSE: F) and Fiat Chrysler

Trump is eager for the U.S. economy to reopen and for Americans to return to work.

He has sparred with California for years over a series of issues, including immigration, vehicle fuel-efficiency standards, funding for high-speed rail and numerous environmental issues. Trump has met with Musk on several occasions during his presidency.

California Governor Gavin Newsom on Monday said he had spoken with Musk several days ago and that the Tesla founderâs concerns helped prompt the state to begin its phased reopening of manufacturing last week.

States and cities around the United States are experimenting with ways to reopen their economies safely after the coronavirus outbreak shuttered businesses and forced tens of millions of Americans out of work.

Musk over the weekend threatened to leave California for Texas or Nevada over his factory's closure. His move has highlighted the competition for jobs and ignited a rush to woo the billionaire executive by states that have reopened their economies more quickly in response to encouragement from Trump.

Tesla also has a vehicle plant in Shanghai and is building another in Berlin. Its lawsuit on Saturday alleged that Alameda County had violated California's constitution by defying Newsom's orders allowing manufacturers to reopen.

In the past, Musk has discussed opening a second U.S. factory outside California. In a tweet in February, he solicited comments on potentially opening a factory in Texas.