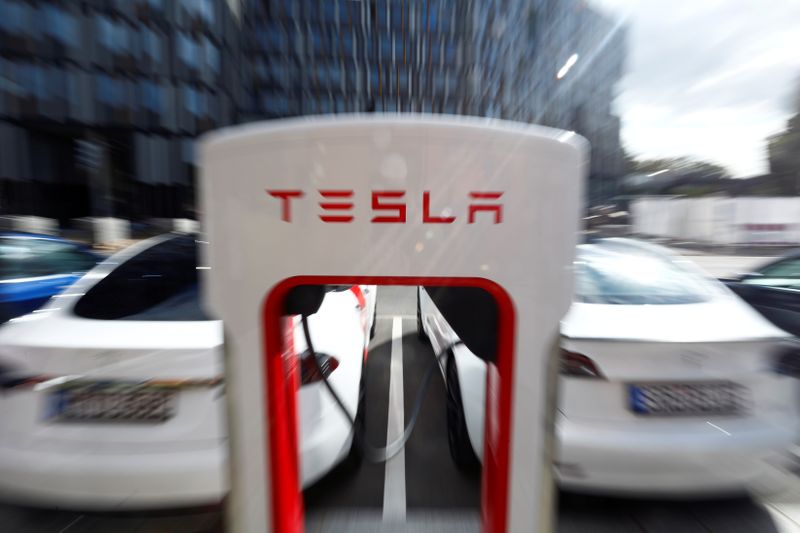 FILE PHOTO: The company logo of Tesla cars is seen on the V3 supercharger equipment during the presentation of the new charge system in the EUREF campus in Berlin, Germany September 10, 2020. REUTERS/Michele Tantussi

(Reuters) - Tesla Inc's (NASDAQ: TSLA) stock was set for a fifth consecutive session of gains as anticipation heats up for its "Battery Day" event next week, recouping some of its recent valuation slump following a sell-off and surprise exclusion from the S&P.

The company's shares were up as much as 4.4% at $437.89 in early trading on Tuesday, still $65 per share shy from its early September highs.

Traders told Reuters the recent gains were in anticipation of the electric-car maker's "Battery Day" next week, where Chief Executive Officer Elon Musk is expected to tout the latest improvements in Tesla's battery technology.

"The battery side is critical for what happens to Tesla. Otherwise it's literally just another carmaker. If that proves to be a game-changer, then the stock goes higher again," Temperton added.

Wall Street analysts are still not fully convinced about Tesla's long-term prospects. The average rating on the company's stock is "hold" and median PT is almost $140 short of current trading levels, according to Refinitiv Eikon data.

Shares of electric-vehicle maker Nikola Corp (NASDAQ: NKLA), which is in a public spat with a short-seller that has accused the company of "fraud", were down nearly 8%.

(Reporting by Munsif Vengattil and Sruthi Shankar in Bengaluru; Editing by Shounak Dasgupta)