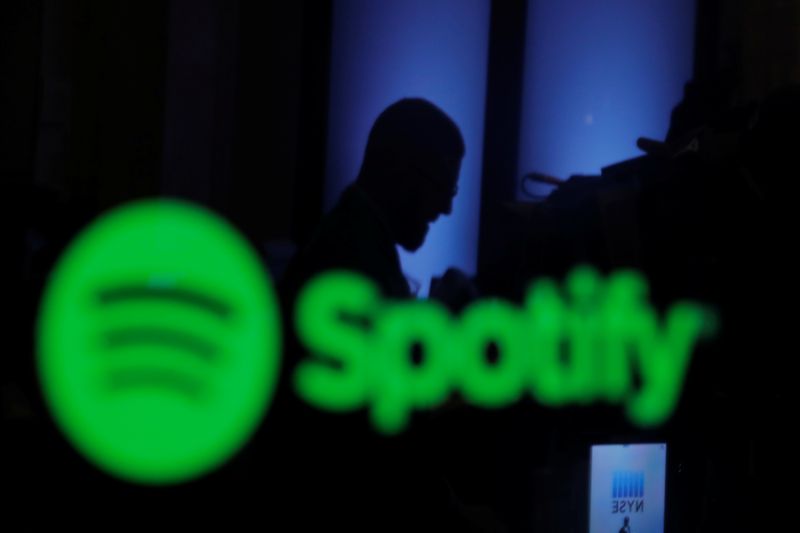 A trader is reflected in a computer screen displaying the Spotify brand before the company begins selling as a direct listing on the floor of the New York Stock Exchange in New York, U.S., April 3, 2018. REUTERS/Lucas Jackson

STOCKHOLM (Reuters) - Spotify on Wednesday forecast that revenue and paid subscribers would miss Wall Street estimates this quarter due to uncertainty over how long the coronavirus crisis would last and with it a surge in demand for its music streaming.

The company's shares, which have more than doubled in the last year, were down 10% in midday trading.

Spotify has seen a sharp rise in paid subscribers during the pandemic as people have been locked down at home and in the fourth quarter beat revenue estimates as it hit 155 million paid subscribers for its premium service.

While advertising was hit by the pandemic, it had little impact on subscriber growth, and may actually have contributed to pulling forward new signups, Spotify said in a statement, adding that total monthly active users rose 27% to 345 million.

"We do believe that probably some of the growth in 2021 may have been pulled forward into 2020," Chief Financial Officer Paul Vogel told Reuters. "Russia for example performed extremely well in 2020 while a lot of our expectations initially were we wouldn't really hit our full stride there until 2021."

While Spotify's expansion drive has made the service available in 93 countries, about 40% of its paid subscribers come from Europe.

Premium subscribers, who account for most of Spotify's revenue, were up 24% in the fourth quarter from a year earlier, beating estimates of 153.26 million.

It, however, expects total premium subscribers in the range of 155 million to 158 million for the first quarter, whereas analysts were expecting it to hit 163.5 million.

The company expects quarterly revenue of 1.99 billion to 2.19 billion euros, short of expectations of 2.23 billion.

Spotify, which launched its service over a decade ago, has spent hundreds of millions of dollars to buy podcast companies such as Bill Simmons' Ringer in an effort to become the "Netflix of audio content".

Spotify's slate of more than 2.2 million podcast titles, up from 700,000 a year earlier, includes "The Michelle Obama Podcast", "Mama Knows Best" by influencer Addison Rae and one by Prince Harry and his wife Meghan.

While some analysts have said that there was no material benefit from podcast investments, Spotify CEO Daniel Ek said "podcasts increase overall engagement and retention".

"We are in the midst of a multi-year effort of that investment and you should expect that investment to keep on happening in the coming years, for sure," Ek told Reuters.

"You can already see 22% to 25% of the user base now listening to podcasts and it's showing meaningful improvement quarter by quarter."