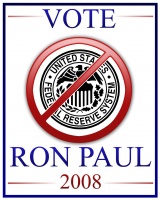 A key House panel approved the Paul-Grayson Amendment by an overwhelming 43-26 Thursday afternoon, which will give watchdogs new authority to audit the Federal Reserve.

Here is a summary of the Paul-Grayson Amendment:

The amendment removes restrictions on GAO audits of the Federal Reserve, as HR 1207 does, but makes a few changes to take into account some of the concerns that the Fed has made known in public testimony. Specifically, the Paul/Grayson amendment:

* Exempts unreleased transcripts and minutes from meetings of the Board and FOMC to address the Fed’s concerns that free and open debate in their meetings would be stifled.
* Sets a 180-day time lag for release of details of market actions the Fed has undertaken, to address the Fed’s concerns that Congress or GAO is second-guessing its actions.
* Removes boilerplate language that allowed GAO to make recommendations on monetary policy and adds a section stating that nothing in the amendment shall be construed as interference in or dictation of monetary policy to the Fed.

Unlike proposals that target the Fed’s 13(3) facilities, the Paul/Grayson amendment opens up the entire $2 trillion Federal Reserve balance sheet to a GAO audit. The Fed’s recent purchases of nearly $800 billion in mortgage-backed securities (MBS) have occurred under the MBS Purchase Program, authorized under section 14(b) of the Federal Reserve Act. This program, which is expected to reach a size of $1.25 trillion, would remain exempt from audit even if all the current 13(3) audit proposals were to go into effect. Targeting facilities that are in the process of being drawn down and that are authorized under a specific subsection of the Federal Reserve while allowing other facilities to spring up in their place is counterproductive to true transparency. All purchases and loans that appear on the balance sheet should be subject to audit, without loopholes for the Fed to evade scrutiny.

We also reject the false dichotomy between transparency and independence. The Paul/Grayson amendment would achieve the necessary transparency of the trillions of dollars of Fed interventions while keeping Congress from directly intervening in the decision-making process. Independence should not be synonymous with secrecy. We urge our colleagues to support the Paul/Grayson amendment.

Dr. Ron Paul is a Republican member of Congress from Texas.