Omicron may become dominant in Europe in months -EU 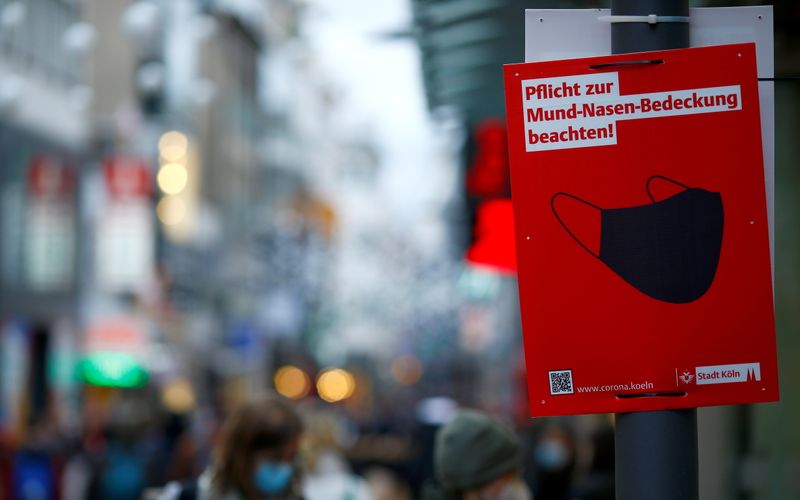 FILE PHOTO: A sign that reads "Observe the obligation to cover your mouth and nose" is placed on Hohe Strasse shopping street as the spread of the coronavirus disease (COVID-19) continues in Cologne, Germany, December 1, 2021. REUTERS/Thilo Schmuelgen

BRUSSELS (Reuters) - The European Union's public health agency said on Thursday that the Omicron variant could be responsible for more than half of all COVID-19 infections in Europe within a few months, but no cases of severe disease had yet been identified in the region.

The estimate could lend weight to preliminary information about the very high transmissibility of the Omicron variant, above that of the Delta variant, which before Omicron was considered the most contagious of the main coronavirus strains.

"Based on mathematical modelling conducted by ECDC, there are indications that Omicron could cause over half of all SARS-CoV-2 infections in the EU/EEA within the next few months," the European Centre for Disease Prevention and Control (ECDC) said in a statement.

The EU and European Economic Area (EEA) include the 27 EU member states plus Iceland, Liechtenstein and Norway.

There is no conclusive evidence about Omicron's transmissibility so far but the World Health Organization's lead person on COVID-19, Maria van Kerkhove, said on Wednesday the agency expected to have data on this within days.

Europe has so far recorded 79 cases of the Omicron variant first detected in southern Africa last month, the ECDC said.

Half of those cases were asymptomatic and the other half showed only mild symptoms. There were no cases featuring severe disease, hospitalisation, or death.

Of cases that have data on age and vaccination status, the majority were young and fully inoculated, it said.

The ECDC provided no further details, but noted that as the people concerned were travellers, they could also be assumed to be healthier than the general population.

"Vaccinations for those either not yet vaccinated or who have not completed their vaccine course and boosters for those over 40 years of age are imperative," said ECDC Director Andrea Ammon in the statement.

Physical distancing measures, adequate ventilation in enclosed spaces and people working from home if at all ill have also proven effective in reducing transmission, she said.