Nokia warns of "challenging" year as it plays catch-up 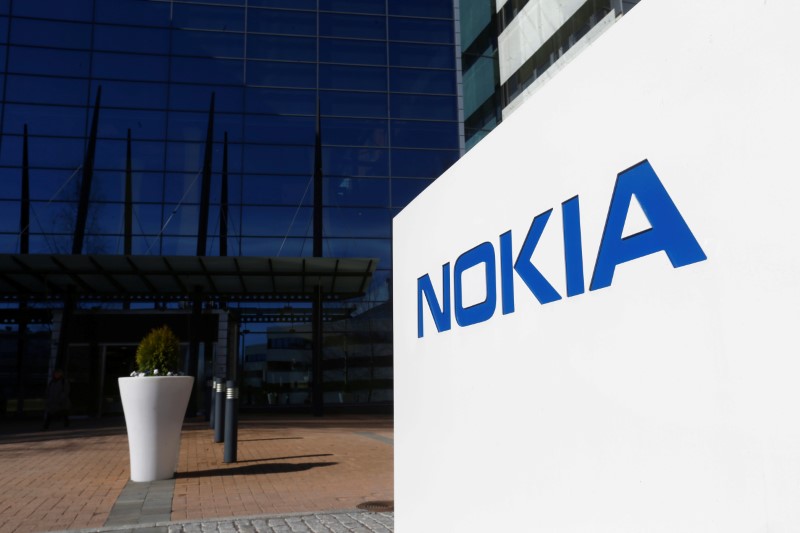 FILE PHOTO: A Nokia logo is seen at the company's headquarters in Espoo, Finland, May 5, 2017. REUTERS/Ints Kalnins

By Tarmo Virki and Supantha Mukherjee

HELSINKI (Reuters) - Finnish telecom network equipment maker Nokia warned of challenges to come this year as it tries to catch up with rivals after a strong finish to 2020.

While both Nokia and rival Ericsson have been gaining 5G customers that might otherwise have gone to China's Huawei, Ericsson has fared better, winning also big 5G contracts in China, where the deployment of the next-generation network is in full swing.

"We have not yet made a breakthrough in 5G (in China) but of course we are not excluding that possibility going forward," new Chief Executive Pekka Lundmark told Reuters. "But we want to be prudent so that we do not want to be there at any cost."

Lundmark reported better than expected fourth-quarter revenue and underlying profit on Thursday but Nokia forecast 2021 revenue to fall to between 20.6-21.8 billion euros ($25-26 billion) from 21.9 billion euros in 2020.

"We expect 2021 to be challenging, a year of transition, with meaningful headwinds due to market share loss and price erosion in North America," Lundmark said.

Nokia said it had lost a part of the Verizon 5G contract in the United States to Samsung Electronics.

Lundmark announced a new strategy https://www.reuters.com/article/nokia-results-int-idUSKBN27E0PJ in October, under which the company will have four business groups and said Nokia would "do whatever it takes" to take the lead in 5G, as it banks on also capturing share from Huawei.

"We believe that we have year-to-date captured about half of the geopolitically influenced opportunities that are there," Lundmark said. "Most of these cases have been in Europe."

Nokia said a growth in its 5G equipment sales in the quarter was partially offset by decreases in its legacy radio access products. Revenue at its mainstay networks business fell 7% to 5.04 billion euros ($6.05 billion).

Quarterly underlying earnings fell to 0.14 euros per share from 0.15 euros a year ago, beating the 0.11 euros consensus.

There was also a boost of about 250 million euros one-time items and net sales of 150 million in the quarter that it had expected in 2021.

Nokia shares, which were down 1.9% in morning trade, have seen wild swings over the last two weeks as the stock has been targeted by the retail trading frenzy, alongside GameStop Corp and other tech companies.

"We maintain our view that Nokia continues to lag Ericsson in technology and is unlikely to catch up before 2022," Liberum analyst Janardan Menon said.