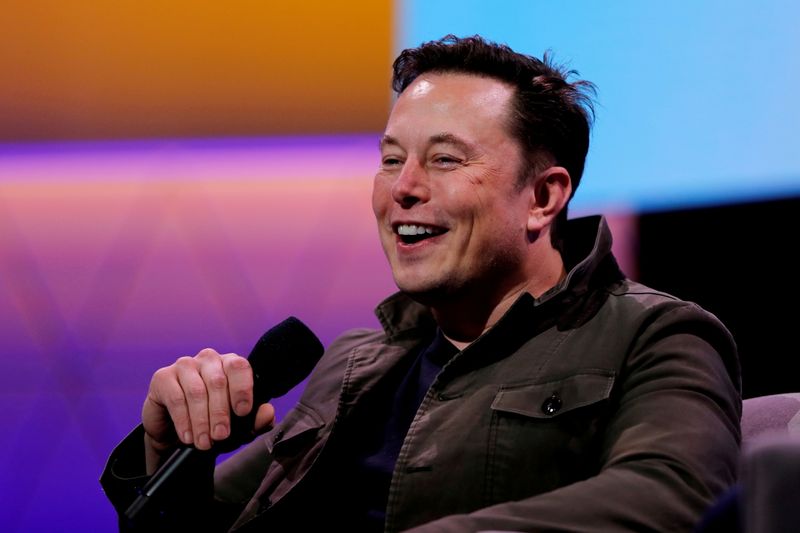 By Simon Jessop and Ross Kerber

LONDON/BOSTON (Reuters) - Elon Musk's decision to stop accepting bitcoin as payment over environmental concerns has been well-received by some of Tesla Inc's investors, offering a warning to corporate peers mulling a dabble with the cryptocurrency.

The Tesla boss' tweets, which had helped drive some of the gains in bitcoin in recent months, this week triggered a 17% slide in the value of the cryptocurrency when he said his company's customers would no longer be able to use bitcoin to buy its cars.

Driving the decision, Musk said, was concern over the amount of energy it takes to "mine" bitcoin, with much of it done in China using cheap, climate-destroying thermal coal. Tesla could revisit the decision if the situation changes, he added.

Bitcoin is created when high-powered computers compete against other machines to solve complex mathematical puzzles, an energy-intensive process.

More than half a dozen investors in the electric vehicle maker contacted by Reuters said they were happy with Musk's decision on bitcoin.

"The energy waste should be avoided regardless of its color. And Tesla should focus on its core business. Drop the bitcoin position and move on," said APG Asset Management Chief Investment Officer Peter Branner, a Tesla investor.

Bitcoin mining uses about the same amount of energy annually as the Netherlands did in 2019, data from the University of Cambridge and the International Energy Agency showed, generating between 22 million and 22.9 million metric tons of carbon dioxide emissions a year, according to a 2019 study in scientific journal Joule.

Guillaume Mascotto, head of ESG and Investment Stewardship at American Century Investments, a top-40 Tesla investor according to Refinitiv, said any move into bitcoin by a company would impact the way they were viewed.

"It would affect our ESG risk views on payment companies and other firms taking large positions in crypto especially if it contributes to 'engineering' their bottom-lines like we saw with Tesla," he said.

A UK-based investor, who declined to be named, said Musk's reversal showed the ability of consumer and investor discontent to push through change, raising broader recognition of the carbon footprint embedded in cryptocurrencies.

"Tesla decided to make a big statement about bitcoin in February and it did not pan out that well, so this is a warning shot to those who might be considering integrating some cryptocurrency into their strategy," the investor said.

Several investors pointed to the need for ESG ratings agencies to do more to highlight the risks associated with cryptocurrencies.

The UK-based investor said leading agency MSCI had given Tesla a strong 9.3 score out of a maximum 10 for environmental risk and referred to the bitcoin foray as only a minor controversy in a February report. MSCI declined to comment when contacted by Reuters.

"What would be most helpful is ensuring use of digital currency gets picked up by the likes of MSCI and Sustainalytics in emissions intensity," she said, referring to a measure of emissions produced per unit of revenue.

David Sneyd, vice president in the Responsible Investment team at BMO Global Asset Management, said that overall, the firm viewed bitcoin and other currencies as "net negative from an ESG standpoint".

"As it currently stands, the positive potential of bitcoin remains unproven, but the negatives are very real and present," he said, citing the environmental concerns as well as those over the use of the currency in financing crime.

For Miranda Beacham, head of ESG â Equity and Multi-Asset Group at Aegon Asset Management, which recently sold out of Tesla, accepting bitcoin raises governance risks given its speculative, volatile nature and lack of regulation.

"I think a lot of investors have picked up on the environmental side ... but I personally don't think that's the biggest problem. I think that the governance and the risk surrounding cryptocurrency is far higher."

"There's a lot of shareholders that have really focused in on 'how dare Tesla, the darling of the ESG world suddenly start dabbling in something as dirty as cryptocurrency.' I think that's a red herring."

(Reporting by Simon Jessop in London and Ross Kerber in Boston; Editing by Matthew Lewis)