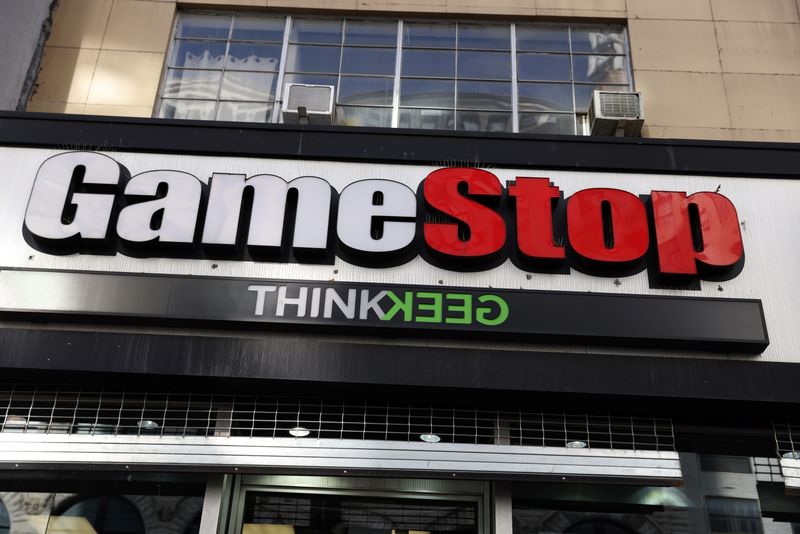 (Reuters) -GameStop Corp's board has approved a four-for-one stock split that will make it more affordable for investors to own shares of the video-game retailer at the center of last year's "meme stock" trading frenzy.

Shares of the company shot up 5.8% to $124.49 in extended trading on Wednesday after the announcement.

Several major U.S. companies have opted for stock splits over the past two years, including Apple, Tesla and Amazon.com.

A stock split makes shares more affordable for individual investors by lowering the price without affecting the company's valuation.

Shares of GameStop skyrocketed more than 680% in 2021 thanks to retail traders on social media platforms such as Reddit who snapped up heavily shorted stocks in a bid to squeeze out hedge funds betting against them.

"GameStop management knows that they have a 100% retail shareholder base and so, they are catering to them," said Wedbush Securities analyst Michael Pachter.

"It (the stock split) is also a distraction because the NFT market is dead, and that was the last thing that they did that tried to get people excited."

This year, the video-game retailer's shares have wound down roughly 20% as the Ukraine crisis and fears of a global recession clouded sentiment.

The company said in March it would seek shareholder approval for the split which would increase its outstanding Class A common shares to 1 billion from 300 million.

Under the split, shareholders will receive a stock dividend of three additional shares of GameStop's Class A common stock for each share held.

The dividend will be distributed after markets close on July 21.