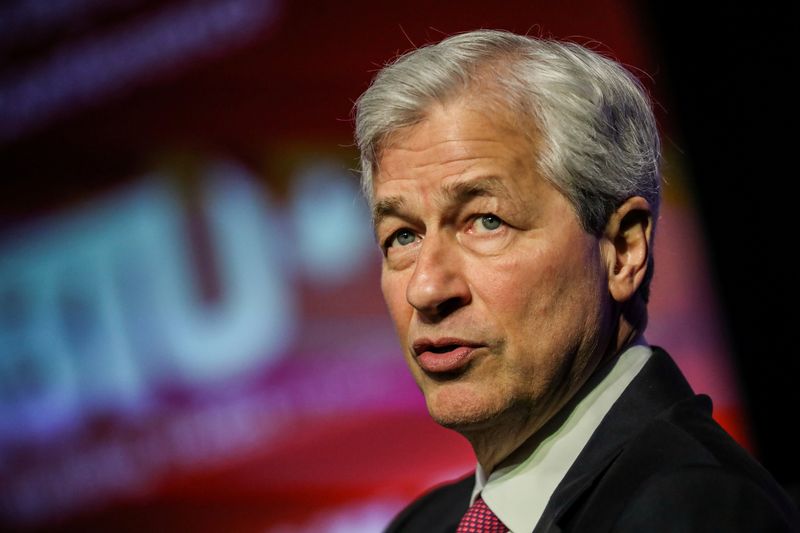 BOSTON (Reuters) - JPMorgan Chase & Co CEO Jamie Dimon has led calls for companies to consider the needs of workers, communities and customers as well as those of shareholders.

But now it is clear: investors come first.

That is how activist investor John Harrington interprets a recent decision by JPMorgan's board - chaired by Dimon - not to convert itself to a "public benefit corporation," a Delaware legal structure gaining attention among would-be financial reformers.

JPMorgan's board cited a legal review it commissioned stating, among other things, that when the interests of stockholders and other constituencies conflict at a corporation like JPMorgan, "the board's fiduciary duties require it to act in a manner that furthers the interests of the stockholders."

That would not be the case for a public benefit corporation, however. Directors at such companies must balance stockholder interests with the interests of other constituencies, according to the review sent to shareholder Harrington, who had requested it.

Harrington said the document's details and the board's decision show the limits of the sentiments espoused by Dimon and other top CEOs when they issued their "Statement on the Purpose of a Corporation" in 2019 calling on companies to look out for all stakeholders.

"What they said was meaningless," Harrington said in a telephone interview.

A representative for the law firm that wrote the report, Richards, Layton & Finger of Wilmington, Delaware, also declined to comment.

DO THE RIGHT THING

Harrington's effort is one of several campaigns aiming to move corporate practices into line with some CEOs' increasingly liberal rhetoric on hot-button issues like climate change and income inequality. A Reuters analysis found shareholders have often kept their leverage.

Other reformers have urged corporate boards to give their own statements of purpose. A rare example came when tobacco company Philip Morris International Inc in its proxy last year gave its commitment to "delivering a smoke-free future" with products scientifically shown to be less harmful than traditional cigarettes. The statement reiterated what the company had called its "strategic priority" in 2017.

Separately, some activists have urged companies to add workers to their boards of directors. But of ten shareholder resolutions filed in 2020 on the topic, none won more than 8% support of votes cast, according to a review by Proxy Insight.

One company that has converted to a public benefit corporation, software maker Veeva Systems Inc, won backing for the change from 99% of votes cast last month.

Veeva's certificate of incorporation, sent by a spokesman, now states that the company will be managed to balance stockholder interests with those of its customers, employees and others. "We believe this corporate structure reflects our guiding principle, 'do the right thing,'" the document states.

Harrington, the investor, has filed other shareholder resolutions for this spring calling on additional banks to convert themselves to public benefit corporations.

One recipient, Bank of America Corp, told Harrington in a Feb. 5 letter that it plans to hold a vote on his proposal at its annual meeting.

But it also stated its board will recommend investors vote against the idea for reasons including that it already operates in a way that balances shareholder and stakeholder interests, and because "The public benefit corporation model is new, largely untested, and is therefore inappropriate for a company of our size and complexity."

A Bank of America spokesman declined to comment further.

A spokeswoman for another recipient, Wells Fargo & Co, noted it previously studied and rejected the idea.

In January 2020, Wells Fargo's board said it could already consider stakeholder interests "without the significant uncertainties, costs, and distractions" that conversion would require.

(Reporting by Ross Kerber in Boston; Editing by Matthew Lewis)