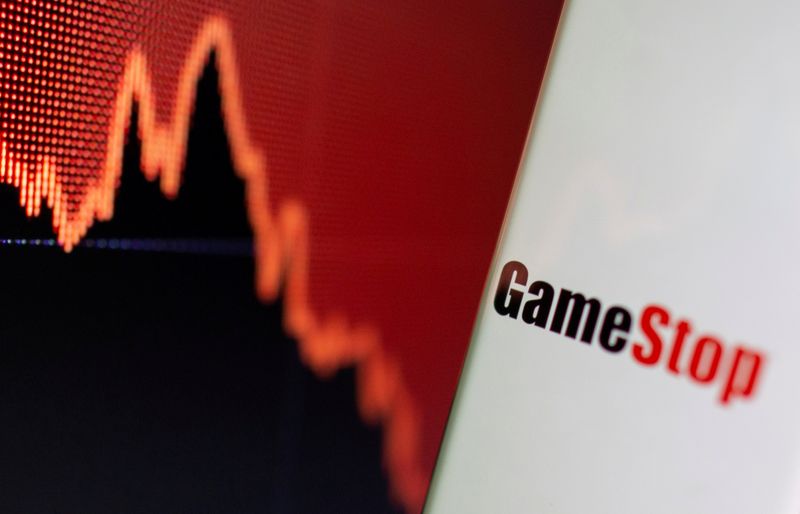 (Reuters) - Shares of Reddit-darling GameStop climbed on Thursday, rising more than 20% at one point in yet another unexplained move that left market watchers looking for a possible catalyst.

GameStop shares closed up 6.4% at $131.93 after earlier hitting $147.87, their highest since a surge in the heavily shorted stock late last month.

One analyst and some Twitter users pointed to a cryptic tweet by Ryan Cohen, a major shareholder of GameStop and founder of e-commerce firm Chewy.com, as a plausible reason for the move, although Reuters could not independently determine causation.

The late afternoon rally in GameStop began roughly around the time that Cohen tweeted what appeared to be a screenshot with the puppet dog advertising mascot of Pets.com, a famous casualty of the dotcom bubble two decades ago.

The tweet was "as good an explanation as any" for the sudden surge in GameStop shares, said Wedbush Securities analyst Michael Pachter in an emailed comment to Reuters.

"The core 'story' is that he will change the company and reverse its fortunes, so anything he does to reinforce that change... is going to move the stock higher," he said.

"I don't know if this was the actual catalyst today, but in such an ugly market, it makes sense."

Wall Street ended sharply lower on Thursday, leaving the Nasdaq down around 10% from its February record high.

A GameStop rally last month has also been linked to a Cohen tweet. A Feb. 24 surge in the company's shares began roughly around the time Cohen tweeted a picture of a McDonald's ice cream cone with a frog emoji.

The tweet left some GameStop bulls wondering online whether it was a veiled message that Cohen would fix GameStop's business, like the fast-food chain modernized its ice cream machines.

GameStop has become one of the most visible of the so-called meme stocks that are closely followed on sites such as Reddit's popular WallStreetBets forum.

The stock surged more than 1,600% in January after a wave of buying forced investors betting against the company's shares to unwind their positions, before paring most of those gains the following month.

Cohen's RC Ventures activist firm reached a settlement with GameStop in January, giving Cohen seats on the company's board.