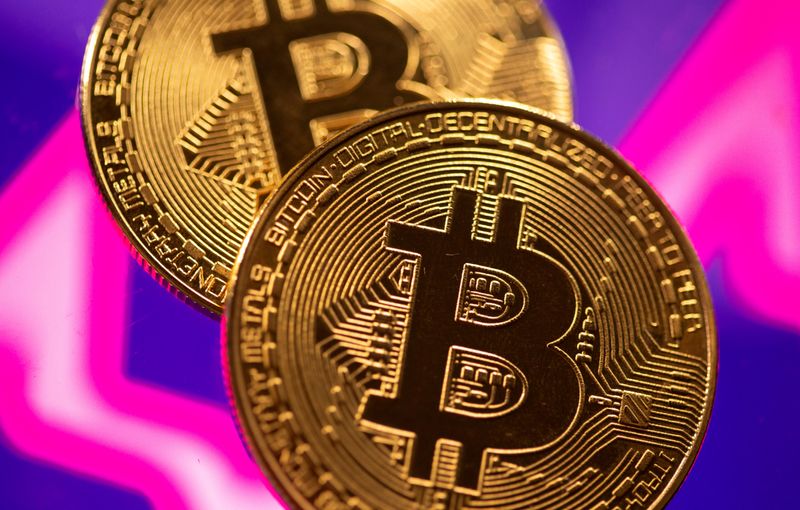 FILE PHOTO: A representation of virtual currency Bitcoin is seen in front of a stock graph in this illustration taken March 15, 2021. REUTERS/Dado Ruvic/Illustration/File Photo

LONDON (Reuters) - Bitcoin hit a record high just shy of $65,000 last week, the latest landmark on the emerging asset's march to wider acceptance. Its gains have been fuelled by growing acceptance among major U.S. companies and financial firms.

Here are some steps from big companies, large investors, banks and payment processors that have pushed bitcoin closer to the mainstream in recent months:

* British fund manager Ruffer Investment Management says it made a bet on bitcoin worth in December around 550 million pounds ($765 million).

* Carmaker Tesla Inc announces it bought $1.5 billion in bitcoin and says it will soon accept the cryptocurrency as payment for its vehicles.

* Goldman Sachs Group Inc reopens its crypto trading desk and says it will offer investments in bitcoin and other digital assets to its wealth management clients from the second quarter.

* Inflows into cryptocurrency funds and products hit a record $4.5 billion in the first quarter, according to asset manager CoinShares.

* UK-based hedge fund Brevan Howard sets up a new fund to invest in digital assets, focusing on a long-only range of digital assets including bitcoin, according to a personal familiar with the matter.

* U.S. cryptocurrency exchange Coinbase Global Inc was valued at $86 billion at the end of its Nasdaq debut, the biggest listing yet by a crypto company.

* Mastercard unveils plans to support cryptocurrency payments across its network.

* BNY Mellon announces a new unit aimed at helping clients trade and own cryptocurrencies and other digital assets.

* The city of Miami votes in favour of a proposal to allow bitcoin to be used to pay city workers and for city residents and businesses to make fee and tax payments with the cryptocurrency.

* Payments processor PayPal allows U.S. consumers to use their cryptocurrency holdings to pay at millions of its online merchants globally.