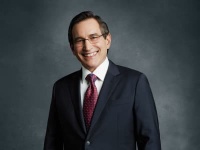 Wapner called out Santelli for his comments about "hyperinflation" in the past from all the Fed stimulus, which of course we have not seen. Santelli wasn't having it.

"I never said the words hyperinflation", Santelli said. "Don't put words in my mouth... I was discussing commodities."

This is when Jim Cramer tried to soothe nerves and said he would play peacemaker. Santelli again wasn't having it.

"I make my own peace," Santelli commented. "I don't need any help."

Santelli then added that he also doesn't agree with much of what Cramer thinks about the Fed. He said Cramer should have stuck with his "THEY KNOW NOTHING" line, regarding the Fed.

Santelli then turned his attention back to Wapner, sarcastically saying "they didn't go big enough in '08 did they, Scott?"

He added that it was all about spending... "The more we give, the more they spend."

Below is a video of the rant by Twitter user @PVofFCF