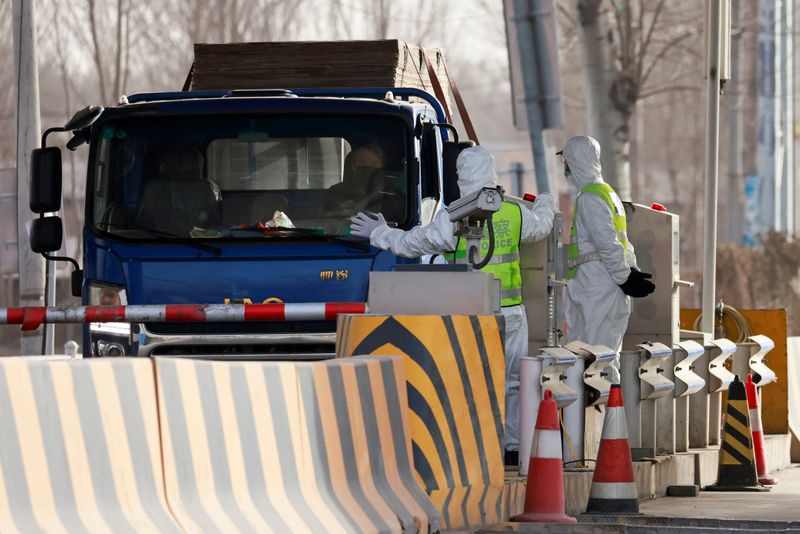 By Sophie Yu and Kevin Yao

BEIJING (Reuters) - From cancelled hotel bookings ahead of the Lunar New Year to steel piled up at mills because of transport curbs in Hebei province, China's battle against a new wave of COVID-19 infections clouds what has been a dramatic economic recovery.

New cases in China are at 10-month highs, prompting the lockdown of 28 million people in two provinces, disrupting logistics and industrial activity, with millions expected to scrap holiday travel plans in a blow to China's efforts to get consumption back on track.

Thanks partly to surging global demand for Chinese-made electronics and gear to protect from coronavirus, China looks set to be the only major economy to expand in 2020, with growth expected at 2.1%.

Given the limited geographic spread of the outbreaks and improved testing and containment, economists do not expect anything approaching a repeat of what happened in the first quarter of last year, when the emergence of the coronavirus resulting in the world's second largest economy contracting by 6.8%.

Manufacturing and export demand remain robust. But economists say consumption, which typically accounts for more than half of the economy and has lagged the wider recovery, may take a hit.

Authorities have urged people not to travel for the week-long Lunar New Year holiday, which starts Feb. 11 and is typically a time to spend on travel, food and gifts.

"The worsening coronavirus situation will impact economic activity, and markets may need to temper their expectations for strong pent-up consumption demand in the coming LNY holidays," Nomura analysts wrote in a note this week.

The outbreak and social distancing measures "add conviction" to Nomura's forecast that policymakers will moderate moves to ease stimulus and slow credit growth, and delay rate hikes into 2022, it said.

But Julian Evans-Pritchard, senior China economist at Capital Economics, said there may be an economic upside.

"One reason many manufacturers have been quick to participate in official efforts to discourage travel is that it would allow them to keep factories running over the holiday," he wrote in a Friday note.

In the steelmaking powerhouse Hebei province, which surrounds Beijing and has seen cities locked down to contain the outbreak, steel inventories have jumped 11% this year, according to data from consultancy Mysteel, with industry sources blaming transport restrictions.

In the Hebei city of Tangshan more than one-third of steel mills have coke supplies of fewer than seven days, which suggests supply shortages, and weekly blast furnace capacity utilization rates fell this week by 1.7% from last week and by 7% from a year earlier, Mysteel data shows.

"The COVID situation may not improve quickly, but the impact will not be as big as in last year's Lunar New Year," said Zhang Yiping, economist at China Merchants Securities in Shenzhen.

Consumption in China was slower to recover than factory output or investment, although retail sales recorded the fourth straight month of year-on-year growth in November.

Gubei Watertown, a tourist site at the foot of China's Great Wall, has suffered cancellations of 8,900 room bookings as well as numerous year-end conferences, Chen Xianghong, president of Wuzhen Tourism Co Ltd, one of its owners, said on the Twitter-like Weibo site on Thursday.

"We can't close, but keeping open is loss-making," he said.

Many companies which would ordinarily be holding parties are cancelling events, while cities have advised couples to delay wedding banquets.

"All employees are not allowed to leave Renhuai, participate in gatherings, or visit public areas such as karaoke outlets, bars or internet cafes," according to a notice to staff reported by state media this week.