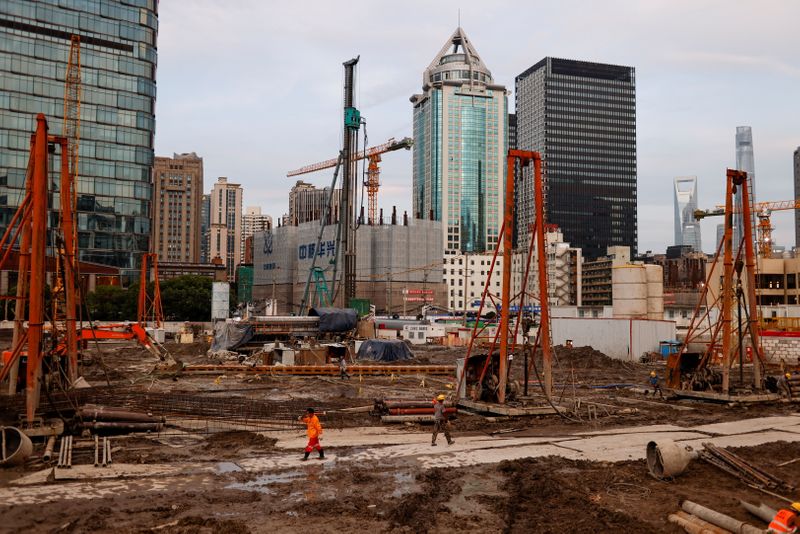 BEIJING (Reuters) -China will stick with its current economic policies in the second half of the year, the ruling Communist Party's top decision-making body said on Friday, maintaining an accomodative stance in the face of an uneven domestic recovery and global uncertainty.

The world's second-largest economy has largely recovered from disruptions caused by the coronavirus pandemic, although growth is set to slow for the rest of the year, with Chinese manufacturers grappling with higher raw material prices, surging logistics costs and global supply chain bottlenecks.

To bolster a slowing economy, the People's Bank of China in mid-July lowered the reserve requirement ratio for banks, releasing around 1 trillion yuan ($154.19 billion) in long-term liquidity.

"(We) will do well in cross-cyclical adjustments of macro policies, maintain the continuity, stability and sustainability of macro policies, make overall plans to effectively link up this year's and next year's macro policies," the official Xinhua News Agency quoted the Politburo as saying following a meeting chaired by President Xi Jinping.

Ding Shuang, chief economist at Standard Chartered in Hong Kong, said the language suggested that top leaders were not particularly concerned about the economy.

"The focus would still be solidifying the current economic recovery and addressing the issues of unevenness," Ding said.

It also said China would boost the autonomy of its macro policies and keep the yuan currency basically stable on a "reasonable and balanced level", while ensuring stable supply and prices of commodities.

The Politburo also urged greater efforts to tap into the potential of domestic markets, singling out the electric vehicle sector for accelerated development. It also called for stepped up efforts to address technology bottlenecks.

China has been squeezed by U.S. bans on cutting-edge technologies, and has been stepping up investment in domestic innovation.

Authorities will also improve supervision of overseas listings by Chinese companies, it said, after a regulatory crackdown on a range of private firms, including tech giants, education companies and ride-hailing app Didi Global, caused policy uncertainty.

Addressing growing concerns about fiscal health of some local governments, China will put in place a mechanism under which top local government officials will be responsible for resolving local fiscal and financial risks, the Politburo also said.

It reiterated Beijing's "three child policy" and pledged to improve the systems for child-birth, child-fostering and education as complementary measures.

Beijing will also unveil as soon as possible an action plan toward its goal of reaching peak carbon emissions by 2030 and reducing them afterwards, it said, while avoiding "campaign-style" carbon reduction efforts, which analysts say have hurt industrial production.