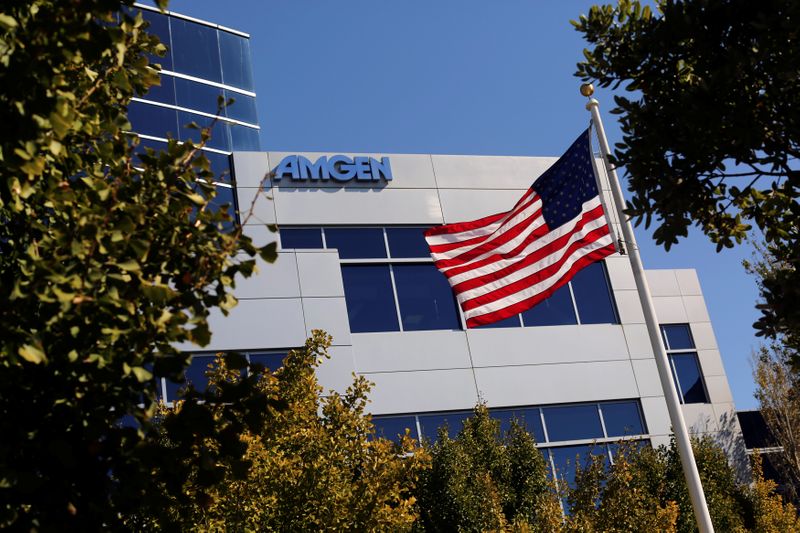 (Reuters) - U.S. biotech Amgen Inc on Tuesday provided a 2021 earnings forecast below Wall Street estimates and said it had paused or halted enrollment for clinical trials of three cancer drugs.

The company also said it expects net selling prices for its drugs to fall by a rate in the mid-single digits this year - after a drop of 6% in 2020 - and the COVID pandemic will continue to impact sales.

"The 2021 outlook is light versus consensus but we believe they are generally being conservative," Jefferies analyst Michael Yee said in an email.

Due to the pandemic, Amgen said physician-patient interactions remained below normal levels in the fourth quarter and it expects that to continue.

The company said recovery later in the year is contingent on the speed and effectiveness of the global vaccination rollout. "We think COVID will be with us for the majority of 2021," Amgen Chief Commercial Officer Murdo Gordon said on a conference call.

Amgen also said it had paused three clinical trials of early stage cancer drugs due to efficacy or safety issues.

The news "will make investors nervous about the pipeline and possibly drive further inquiry into whether they need to do more M&A," Yee said of deals and acquisitions.

Amgen reported a higher-than-expected profit for the fourth quarter, with adjusted earnings per share of $3.81 beating the average analyst estimate by 41 cents. The number of Amgen shares outstanding fell 13% from a year earlier.

Sales of newer migraine drug Aimovig totaled $104 million for the quarter, short of the $115 million projected by analysts. But sales of cholesterol fighter Repatha rose 27% to $253 million, beating Wall Street estimates of $223 million.

Increased competition from cheaper generics and biosimilars hit sales of older drugs such as infection-fighter Neulasta, which saw sales fall 19% to $536 million.