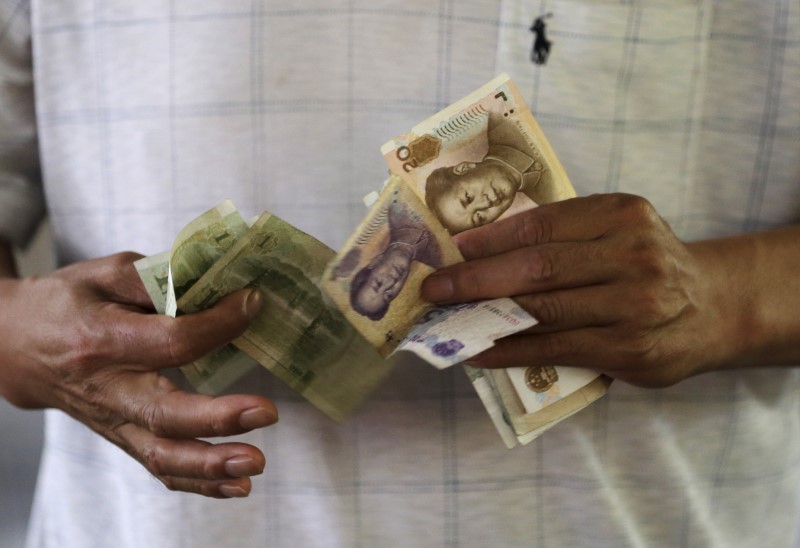 By Samuel Shen and Nathaniel Taplin

SHANGHAI (Reuters) - China's central bank held the line on its yuan for a fourth straight session on Wednesday while putting the squeeze on offshore sellers of the currency, calming fears of a sustained depreciation - at least for now.

Having been alarmed by a near 5 percent slide in the yuan since August, investors globally appeared relieved by the stabilization.

Asian share markets outside China rose, and proxies for the yuan in currency markets, such as the Australian dollar, also firmed, while investors retreated from the safe-haven yen.

Chinese shares, however, ended the day sharply lower after a positive start, shrugging off December trade data, which beat forecasts and tempered some of the fears about the slowdown in the world's second-largest economy.

The People's Bank of China (PBOC) fixed the daily mid-point for the yuan at 6.5630 to the dollar, little changed from firm fixes on the previous two days. The market is allowed to deviate 2 percent either side of the daily fix.

The central bank has used aggressive intervention to force a huge leap in yuan borrowing rates in Hong Kong, essentially making it prohibitively expensive to speculate against the currency offshore.

The implied overnight borrowing rate shot over 90 percent on Tuesday, and while it moderated to around 10 percent on Wednesday, the central bank's signal was clear.

"We believe China is sending a strong message to speculators and trying to stabilize RMB depreciation expectations," HSBC said in a research note.

The result has been to drag the offshore level of the yuan back toward the official onshore level, closing a gap that had threatened to get out of control just a few days earlier.

HSBC said it expected the PBOC would allow the onshore rate to continually adjust in line with its commitment to a more flexible currency regime, and would periodically intervene to squeeze out speculators when the offshore rate strays too far.

Domestic equity markets started positively in the morning, clocking up gains of around 1.2 percent, but went sharply into reverse in the afternoon.

The Shanghai Composite Index ended down 2.4 percent, dipping below the 3,000 mark, while the CSI300 index shed 1.9 percent.

Analysts said trading volume continued to wane, suggesting many investors were staying on the sidelines or putting their money elsewhere.

Perceived mis-steps by the authorities and the wild swings on the forex and equities market had stoked concerns that Beijing might be losing its grip on economic policy, just as the country looks set to post its slowest growth in 25 years.

China is expected to post its weakest quarterly economic growth since the global financial crisis, when it releases fourth quarter gross domestic product data on Jan. 19. A Reuters poll of economists forecast growth slipping to 6.8 percent from 6.9 percent in the third quarter.

More positively, trade data released during the morning showed exports denominated in dollars fell much less than expected and in yuan terms actually rose, which could be an early sign that the yuan's depreciation has helped exporters.

A customs spokesman said the impact would weaken over time, however, and China faced challenges in 2016 due to weak external demand.

Imports also fell less than expected, and the volume of imports of copper, iron ore, crude oil, coal and soybeans all rose in December from the preceding month.

Nomura said the data offered a sign of the economy stabilizing, albeit at a low level.

"Nevertheless, we still expect growth to resume a downtrend later in the year, given ongoing structural headwinds," it added.