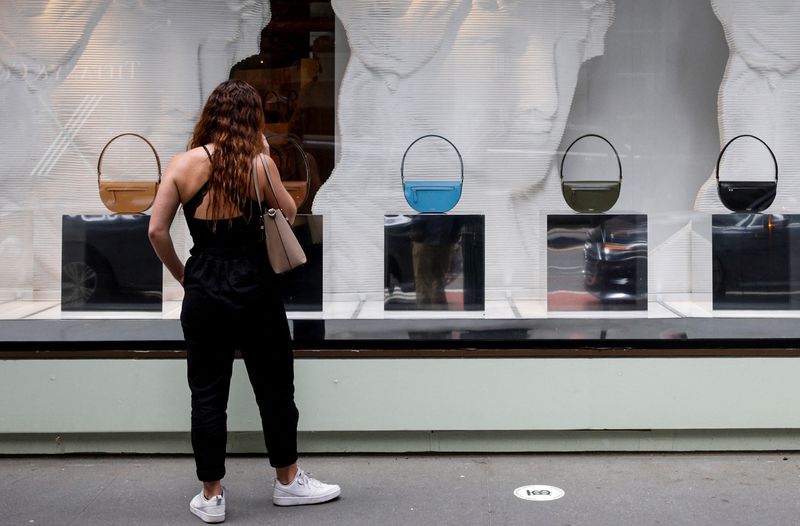 A shopper looks at handbags at Burberry on 5th Avenue in New York City, U.S., May 24, 2021. REUTERS/Brendan McDermid

(Reuters) - U.S. consumers expect their monthly spending to grow above pre-pandemic levels this year but people are becoming less likely to spend big on vacations and other non-essential items - a sign that more households may be more concerned about rising prices, according to a survey released Monday by the New York Federal Reserve.

"In contrast, households report a lower likelihood of making large purchases over the next four months, which points to the likely contribution of elevated inflation expectations," researchers wrote.

U.S. consumer prices are rising https://www.reuters.com/world/us/us-consumer-prices-increase-strongly-december-2022-01-12 at the fastest clip in nearly four decades because of snarled supply chains and other disruptions related to the COVID-19 pandemic. The elevated inflation is eating into wage increases and boosting expectations that the Federal Reserve will start raising interest rates as early as March and begin shrinking its balance sheet later this year.

Respondents said in December that they expect their monthly household spending to grow by a median of 4.6% over the next year, up from 4.2% in August. Spending on everyday essentials is expected to rise more substantially, by a median of 5.4% in the coming year.

Consumers are becoming more conservative with their spending, the survey showed. Spending on non-essential items, including hobbies, vacations and other leisure activities, is now expected to rise more slowly in the next year, with a median 2.5% growth reported in December, compared to 2.6% in August.

The share of households who made large purchases in the previous four months dropped to 58.1% in December from 62.6% in August, but was still above the December 2020 level of 54.6%.