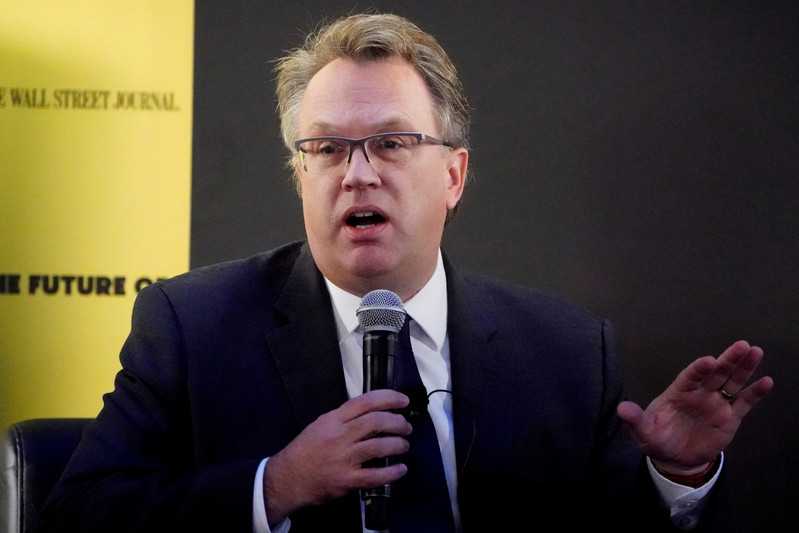 (Reuters) -New York Federal Reserve President John Williams said on Monday that selling mortgage-backed securities could be an option for the U.S. central bank to consider down the road in its goal to orient its balance sheet largely around holdings of Treasuries.

Williams said MBS sales are not under consideration for the first stages of the plan unveiled this month to pare down the Fed's $9 trillion balance sheet starting in June. Speaking to a Mortgage Bankers Association conference, Williams said "once our balance sheet reduction is well underway ... that is an option that the Federal Open Market Committee (FOMC) could consider."

U.S. central bank officials are confident the $60 billion monthly cap they have established for redemptions of Treasury securities during the quantitative tightening process should be achievable on a consistent basis. But Williams said the $35 billion monthly target for MBS redemptions may prove harder to reach each month.

"That's a pretty big number," Williams said. "Our own forecasts are that we wouldn't see $35" billion every month especially now that the jump in interest rates on mortgages has dramatically slowed refinancing activity.

The interest rate on a 30-year fixed-rate mortgage has risen 2.2 percentage points since the start of the year, MBA data shows, and at 5.53% in the latest week is now at its highest level since 2009. A weekly MBA index tracking refinance activity has plunged to the lowest level since 2018.

Mortgage rates have surged in response to the Fed's own shift in policy to tackle inflation that is running at its fastest pace in four decades.

The Fed earlier this month raised its benchmark overnight interest rate for a second time this year and by the most in a single instance - half a percentage point - in 22 years. Williams said last week that plans to raise rates by 50 basis points at each of the policy-setting FOMC's next two meetings is sensible.

He echoed that sentiment on Monday, saying bringing inflation down is the Fed's "number one issue" and the central bank will proceed "expeditiously" with its task.

"Getting monetary policy in the right place to bring balance back to the economy and bring inflation down ... that's the job we're focused on," he said.

Between the Fed's rate hikes and quantitative tightening plans, Williams said U.S. financial conditions already have tightened to a "far greater" degree than they did in 1994, the year of the central bank's last aggressive tightening cycle.

Even so, he said there is little indication that key financial markets are being disrupted by the process. While the Treasury market has seen steep losses in recent months as investors repositioned for rising interest rates, there have been few indications of the sudden loss of liquidity that emerged early on in the coronavirus crisis and prompted the Fed to intervene with large-scale asset purchases.

"I'm not seeing signs of market dysfunction in the Treasury market," Williams said.

(Reporting by Dan BurnsEditing by Paul Simao and Jonathan Oatis)