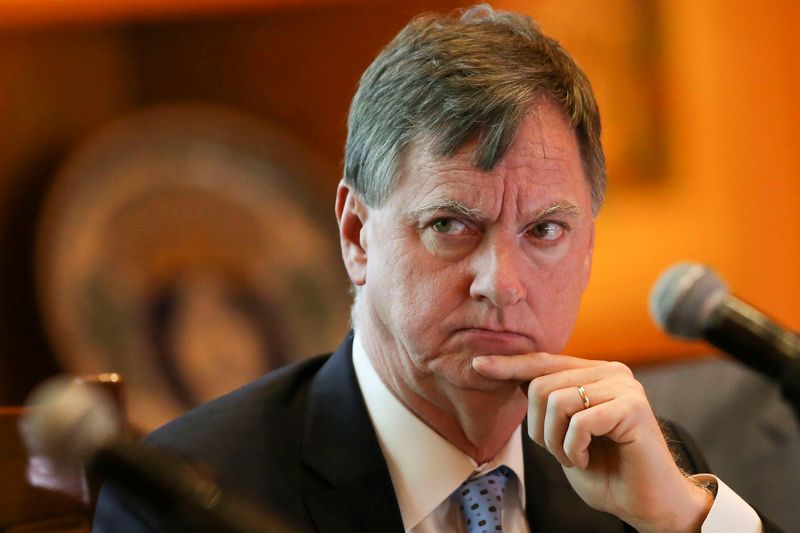 (Reuters) - Chicago Federal Reserve Bank President Charles Evans on Wednesday signaled he would likely back another big interest rate hike in July unless inflation data improves, saying the Fed's top priority is to "take the steam" out of price pressures.

"Seventy-five (basis points) is a very reasonable place to have a discussion," Evans told reporters after a talk in Cedar Rapids, Iowa, when asked about his outlook for the Fed's July policy decision. "I think 75 would be in line with continued strong concerns that the inflation data isn't coming down as quickly as we thought."

Fast-rising rates do increase the risk of a downturn, Evans said.

"We're obviously taking on risk when we want to slow demand, to keep it in line with supply," Evans said. "To think that we can fine tune something like this with tremendous precision -- I mean, we just don't have that ability."

Most Fed policymakers still believe a "soft landing" is possible, forecasting a slowdown in growth to just below its long-run trend of 1.8% next year, and an increase in the unemployment rate, now 3.6%, to 4.1% by 2024.

"The challenge for monetary policy that's always trying to engineer a soft landing during a rising rate environment is something else happens and then that's the additional shock that takes the economy down," he said. That was what happened in 1991, he said, when Iraq's invasion of Kuwait tipped the economy into recession.

Russia's war in Ukraine and China's COVID lockdowns are among the risks, but that cannot stop the Fed from doing its job, he said.

"The first thing that we're looking at is to make sure we take the steam out of the inflation pressures," he said, adding that there is "tremendous" consensus at the Fed that rates need to be high enough to be modestly restrictive on growth.