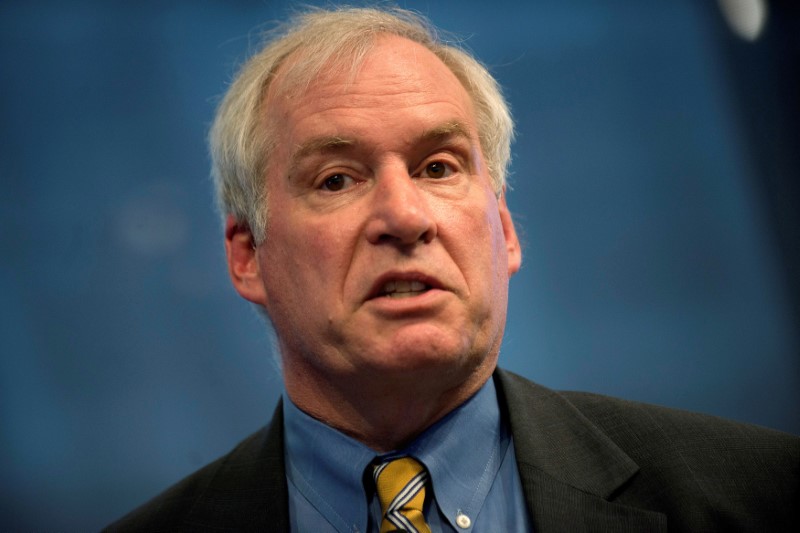 By Ann Saphir and Dan Burns

(Reuters) - The Federal Reserve could stop adding to its holdings of mortgage-backed securities (MBS) several months before it finishes increasing its stockpile of Treasuries, if the findings of a Reuters poll of economists are a guide.

The expectation the U.S. central bank could reduce its MBS purchases by a relatively larger proportion than its purchases of Treasuries coincides with a growing debate about the need for any buying of housing-backed assets, given the red-hot real estate market.

It is uncertain exactly how the Fed will go about slowing the expansion of its $8 trillion balance sheet, a stash of assets that has roughly doubled in size since it kicked off the large-scale purchases in March 2020 to stem the massive economic fallout triggered by the COVID-19 pandemic.

The Fed cut its benchmark short-term interest rate to near zero at the outset of the pandemic, and the bond purchases were designed to help anchor longer-term rates as well, holding down borrowing costs for households and businesses.

The results of the Reuters survey, which was released on Friday, showed economists expect the Fed to unveil its plans to taper its monthly purchases of $80 billion of Treasuries and $40 billion of MBS in the third quarter, perhaps as early as its annual policy retreat in August.

Moreover, the poll showed the median view of economists pointed to the Fed scaling back its buying of Treasuries and MBS at an initial pace of $10 billion each, likely starting in January 2022. That would represent a 12.5% cut in Treasury purchases but a 25% reduction in MBS purchases.

If the central bank's previous tapering exercise in 2014 stands as a template, that pace would signal a conclusion of its MBS taper by around the middle of next year, with additions to its Treasury holdings wrapping up nearer to the end of 2022.

Winding down the asset purchases is an essential first step in the eventual normalization of monetary policy and one that Fed officials are expected to start debating as early as next week, when they gather for a two-day meeting, as the economy shows signs of recovering swiftly from its pandemic-induced recession.

The Fed's initial mission in March 2020 was to restore order to financial markets that were foundering during the early days of the crisis, and its massive purchases of both Treasuries and MBS backed by Fannie Mae, Freddie Mac and Ginnie Mae - among the most widely held and trusted government-backed assets in the world - helped accomplish that goal.

More recently, though, some Fed policymakers have questioned the need to keep up with the MBS purchases, in particular, given the different role they have played in this crisis. Dallas Fed President Robert Kaplan and Boston Fed President Eric Rosengren have noted that the housing market - the trigger for the financial crisis more than a decade ago - is booming and has hardly lost a step during the pandemic.

And Kaplan, for one, has said he believes the Fed's MBS purchases may be having the unintended side effect of fueling excesses.

Bill English, who as a top Fed economist helped shape the last taper, isn't buying it.

"Tapering faster with MBS is a way of leaning a little bit against what might be seen as risks in the housing market. That would surprise me," English, now a professor at the Yale School of Management, said at a Deutsche Bank event this week. He noted that housing market excesses aren't being driven by the kind of leverage seen in the run-up to the 2007-2008 financial crisis, and that shifting purchases from MBS to Treasuries would have only a small effect on mortgage rates, as the housing market mostly prices off of Treasury yields anyway.

"It is only a marginal effect," English said. "Nonetheless, we may see some discussion of that."

During the last taper, the Fed reduced its purchases of the two assets by $5 billion each in the month following each policy meeting after unveiling its plan at its meeting in December 2013. Officials insisted the reductions were not on a pre-set course, but they never once deviated from that script and wrapped up the tapering program at the end of October 2014.

Then, however, the Fed had been buying $45 billion of Treasuries and $40 billion of MBS each month during its final phase of quantitative easing, known as QE3. The Fed is now buying twice the amount of Treasuries each month as MBS, so reducing the pace by the same amount on each front would wrap up the MBS taper notably faster.

Indeed, some respondents in the Reuters poll predicted a pace for each that would reflect the current split and bring the asset tapers to an end at the same time. Others suggest it may begin with a modest MBS-only taper.

The position MBS hold in the Fed's portfolio and the central bank's footprint in that market, however, add a different wrinkle this time around.

Given the importance of MBS to the mission coming out of the financial crisis - supporting a slow-to-heal housing market - mortgage bonds were then a substantially larger portion of the Fed's total bond holdings - more than 40% - than they are now - around 30%. And the Fed's share of the MBS market was also larger, peaking at nearly 30%, than in the current program, when it held less than a quarter of the market earlier this year.

By contrast, the Fed's footprint in the Treasury market, at around 25%, is larger than during its previous asset purchase program.