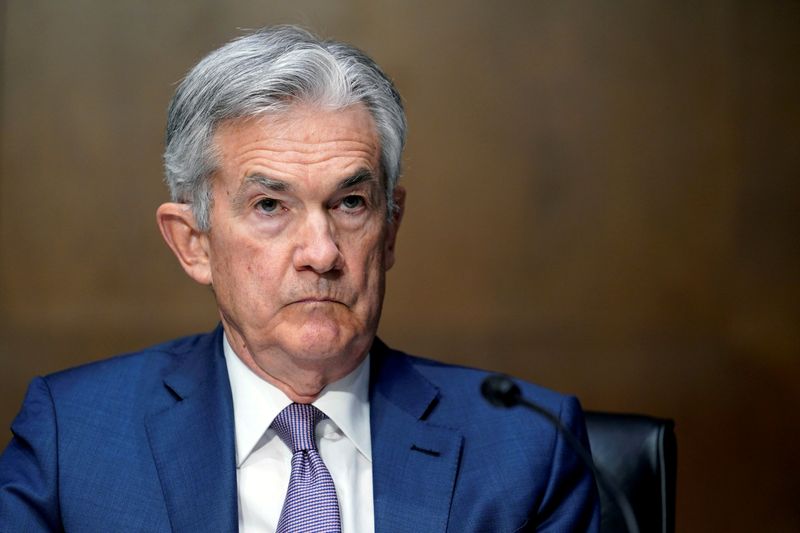 (Reuters) - The U.S. economy is going to temporarily see "a little higher" inflation this year as the recovery strengthens and supply constraints push up prices in some sectors, but the Federal Reserve is committed to limiting any overshoot, Fed Chair Jerome Powell said in an April 8 letter to Senator Rick Scott.

"We do not seek inflation that substantially exceeds 2 percent, nor do we seek inflation above 2 percent for a prolonged period," Powell said in a five-page response to a March 24 letter in which the Florida Republican raised concerns about rising inflation and the U.S. central bank's bond-buying program.

Those modifiers - "substantially" exceeding 2% inflation or above that level for a "prolonged" period - help to more sharply define the upper bounds of the Fed's comfort zone as prices rise.

"I would emphasize, though, that we are fully committed to both legs of our dual mandate - maximum employment and stable prices," Powell said.

The Fed slashed its benchmark overnight interest rate to near zero last March after the coronavirus pandemic hit the United States, and has promised to leave borrowing costs unchanged until the economy reaches full employment, and inflation hits 2% and is on track to "moderately" exceed that level for some time.

The central bank is also buying $120 billion in Treasuries and mortgage-backed securities each month to keep interest rates at a level that supports hiring and spending, and has promised to keep doing so until it sees "substantial further progress" toward full employment and the 2% flexible inflation target.

Most Fed policymakers don't expect to reach those targets for another couple of years.

"Our future policy actions will be based on actual progress toward our objectives," Powell told Scott, underscoring a point the Fed chief has made frequently in recent months - that the central bank won't raise rates based on forecasts, as it did six years ago. Many analysts now view the 2015 rate-hike push as a policy error that unnecessarily put the brakes on the recovery from the financial crisis less than a decade earlier.

"If progress towards our employment and inflation objectives slows, we will maintain a highly accommodative stance for longer," Powell wrote in the letter. "Conversely, if progress turns out to be more rapid, adjustments to the stance of policy would likely occur sooner."

Scott, while not on the Senate Banking Committee that directly oversees the Fed, has been a vocal critic of Powell. The senator, seen as a possible contender for the White House in 2024, has warned that the Fed's low interest rates and bond-buying program will force prices higher, hurting families and businesses.

"The data is clear that inflation is rising, and Chair Powell continues to ignore this growing problem," Scott's office told Reuters in an email that provided Powell's letter. "Senator Scott remains concerned about the impact inflation will have on low and fixed-income American families, like his growing up. He is calling on Chair Powell to wake up to this threat, lay out a clear plan to address rising inflation and protect American families."

In his response, Powell said that high inflation is unlikely, and that low inflation hurts American businesses and households and constrains the Fed's ability to offset economic shocks with easy monetary policy.

'WE HAVE THE TOOLS'

After a decade in which inflation was too low, the Fed is now aiming for inflation moderately above 2%.

"We understand well the lessons of the high inflation experience in the 1960s and 1970s, and the burdens that experience created for all Americans," Powell said in his letter. "We do not anticipate inflation pressures of that type, but we have the tools to address such pressures if they do arise."

Powell also sought to allay the concerns expressed by Scott in his letter last month that the Fed's bond purchases would unleash "an unprecedented amount of deficit spending and borrowing by Congress."

Under former President Donald Trump last year and under President Joe Biden this year, Congress has approved an unprecedented $6 trillion in aid to help Americans weather the pandemic. The relief has been largely funded by government debt.

The central bank's bond-buying, Powell said, is aimed at keeping financial conditions easy and markets functioning, and is "unrelated to the magnitude of fiscal deficits," adding that the Fed doesn't buy bonds directly from the government.

Fed policymakers are expected to stick with the super-easy monetary policy at a meeting next week, even as the economy strengthens and increasing COVID-19 vaccinations make a return to a more normal life in the United States likely in 2021.