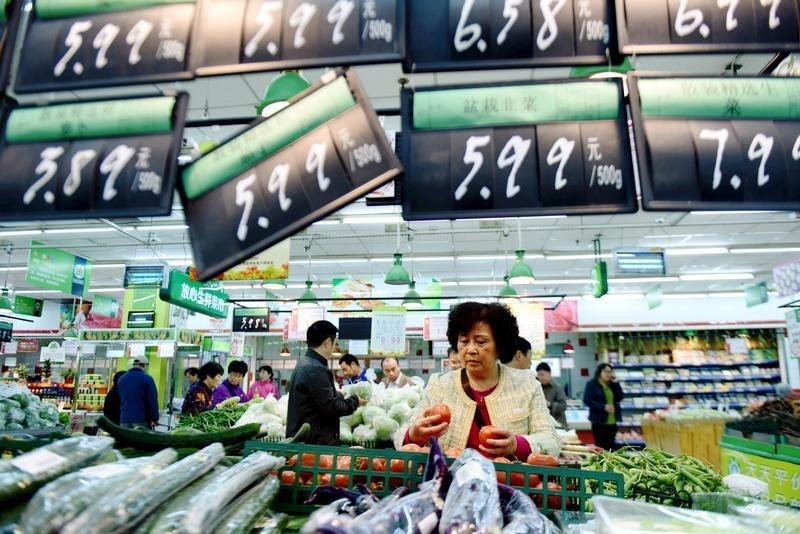 But analysts disagreed on whether the price trends alone are compelling enough for the central bank to shift to a more cautious stance on interest rate cuts just yet, after lowering them six times since late 2014.

Strong March data had raised hopes the economy was bottoming out from a prolonged slump -- possibly allowing the People's Bank of China (PBOC) to take its foot off the gas -- but mixed April data so far and surging debt levels have fueled doubts about whether any recovery will prove sustainable.

"With regards to monetary policy, we do not expect inflation to play a large part in the central bank's thinking," said Chester Liaw an economist at Forecast in Singapore.

"Inflation prints are not too high to dissuade them from further easing if need be, and not too low to warrant loosening."

The consumer price index (CPI) rose 2.3 percent in April from a year earlier, largely due to a spike in food prices, particularly pork. The reading has now been at the same level for three months in a row, and April defied market expectations for a slight pick-up in inflationary pressures.

Non-food prices rose just 1.1 percent, ticking up from March, but again not showing a build in price pressures that would be expected if the broader economy was suddenly perking up.

Producer price trends in April were more encouraging, with price declines easing to 3.4 percent from a year earlier, less than the 3.8 percent economists had forecast and a fall of 4.3 percent in March. On a sequential basis, the producer price index (PPI) rose for the second month in a row.

HSBC believes downside risks to growth and inflation mean it is too early to change China's policy stance just yet.

But some analysts maintain that if inflation stays at current levels, there is less need for more cuts to interest rates or banks' reserve requirements.

"We think that CPI could peak in Q2 as the pork price cycle turns, but at above 2 percent it's already at a level which constrains the room for further rate cuts," said Ding Shuang, chief economist for Greater China at ANZ Bank in Hong Kong.

There are suspicions that signs of improvement in both consumer and producer prices might prove short-lived.

Beijing has released 3 million kg of frozen pork reserves in a bid to combat rising prices, which jumped 33.5 percent in April. And overall food prices dipped in April from March.

On the producer side, a recent rally in prices of raw materials such as iron ore and steel that resuscitated corporate cash flows is rapidly fizzling.

"The acceleration of PPI inflation in the past two months is largely due to surging steel prices pushed up by speculative flows, rather than improving demand," Zhou Hao, senior emerging market economist for Commerzbank, said in a note.

"As long as the underlying demand remains sluggish, we think that PPI inflation is likely to turn soft soon. We believe that China's monetary policy stance will remain accommodative in the foreseeable future."