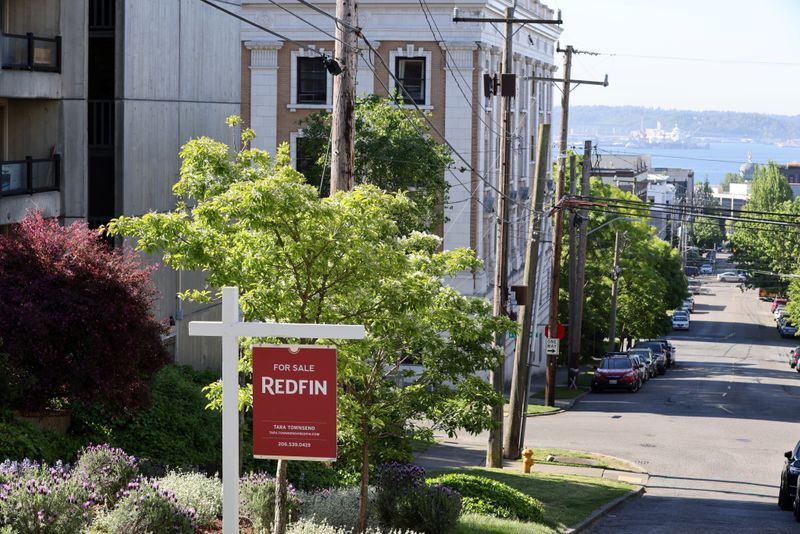 FILE PHOTO: A "For Sale" sign is posted outside a residential home in the Queen Anne neighborhood of Seattle, Washington, U.S. May 14, 2021. REUTERS/Karen Ducey

(Reuters) -Contracts to purchase previously owned U.S. homes declined in June in step with a spike in home prices after rebounding strongly in the prior month.

The National Association of Realtors (NAR) said on Thursday its Pending Home Sales Index, based on contracts signed last month, fell 1.9% to 112.8. Economists polled by Reuters had forecast pending home sales would increase 0.3%.

Pending home sales for May were revised to show an increase of 8.3% instead of the 8.0% gain previously reported.

Pending home contracts are seen as a forward-looking indicator of the health of the housing market because they become sales one to two months later.

"Pending sales have seesawed since January, indicating a turning point for the market," Lawrence Yun, NAR's chief economist, said in a statement. "Buyers are still interested and want to own a home, but record-high home prices are causing some to retreat."

House prices have soared in the past year, with the median price for both new and existing homes now topping $360,000.

Compared with one year ago, pending home sales were down 1.9%.

Sharp drops in pending home sales in the South and West in June outweighed modest increases in the Northeast and Midwest.

"The Midwest region offers the most affordable costs for a home and hence that region has seen better sales activity compared to other areas in recent months," Yun said.

Home prices have surged nationwide in large part due to limited supply. Contrary to the run-up to the 2007-2009 financial crisis, the current boom does not feature a frenzy of speculators and buyers with low credit scores trying to flip homes.

The average contract interest rate for traditional 30-year mortgages declined to 3.01% - its lowest level since February - in the week ended July 23.