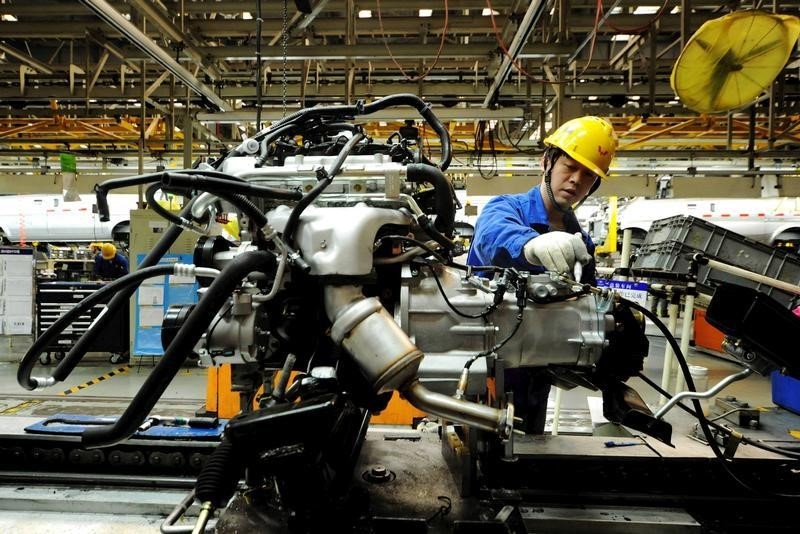 An employee works on an assembly line producing automobiles at a factory in Qingdao, Shandong Province, China, March 1, 2016. REUTERS/Stringer

BEIJING (Reuters) - Growth in China's manufacturing sector stalled in June, an official survey showed on Friday, adding to expectations that Beijing will have to roll out more stimulus soon to boost the sluggish economy.

While output hit a 12-month high, nearly all other measures showed signs of weakening, suggesting a spring bounce in activity is fizzling. Export orders and inventories fell and factories shed workers at a faster rate.

A similar survey showed activity in China's services sector picked up in June, which if sustainable would indicate progress in the government's bid to rebalance the economy.

But strength in services is not expected to be strong enough to support growth if manufacturing continues to decline, and analysts are raising expectations of more government spending and policy easing by the central bank.

The outlook for Chinese exporters, a major force in the manufacturing sector, has been clouded further by Britain's vote last week to exit the European Union, which Premier Li Keqiang said "increased uncertainties in the global economy".

The Brexit vote and weaker economic growth globally have impacted exporters, China's statistics bureau said in a statement with the data.

The official Purchasing Managers' Index (PMI) eased to 50.0 in June from 50.1 in May and right at the 50-point mark that separates growth from contraction on a monthly basis.

Analysts polled by Reuters had predicted the reading would dip to 50.0, a four-month low.

A private survey of manufacturers painted an even darker picture, showing activity shrank more than expected in June and for the 16th month in a row. The Caixin/Markit Manufacturing Purchasing Managers' index (PMI), which focuses more on smaller to mid-sized firms, fell to 48.6 from May's 49.2.

In light of renewed weakness in the manufacturing sector and fresh risks posed by Brexit, analysts expect Beijing to take new measures to support growth, possibly as early as this month.

"We believe the government will stimulate the economy by hastening infrastructure investment and urbanization. The PBoC may also cut interest rates or the reserve requirement ratio to boost business confidence," ANZ said in a research note.

Other China watchers agreed more stimulus is on its way.

"We believe an overall easing bias will be maintained to counter the economic slowdown and mitigate the corporate debt burden," said senior emerging market economist Zhou Hao at Commerzbank.

"We maintain our view that the PBoC will cut policy rates by 25 basis points this month, and a few RRR cuts can be highly expected in the second half of this year as well," he said, referring to reductions in banks' reserve requirement ratio which would free up more money for lending.

Both the official and private factory surveys showed companies shed jobs at a faster pace in June, which could weigh on consumer confidence and spending in coming months. Cost cutting was cited in the Caixin survey, but job losses also could be rising as the government has pledged broad capacity cuts across a range of industries.

Both surveys showed further strains on smaller companies, a sign that the government will have to continue to lean more on big state firms to generate growth even as analysts warn of the risks of relying too much and too long on debt-fueled stimulus.

The Brexit vote has led at least two investment banks to lower their forecasts for China's 2016 growth. Nomura trimmed its forecast to 6.0 percent from 6.2 percent and Bank of America Merrill Lynch cut its view to 6.4 percent from 6.6 percent.

A sub-index of the official survey for the construction industry rose significantly as the government goes on an infrastructure spending free, while financial services and property sectors contracted as those markets begin to cool following strong activity earlier in the year.