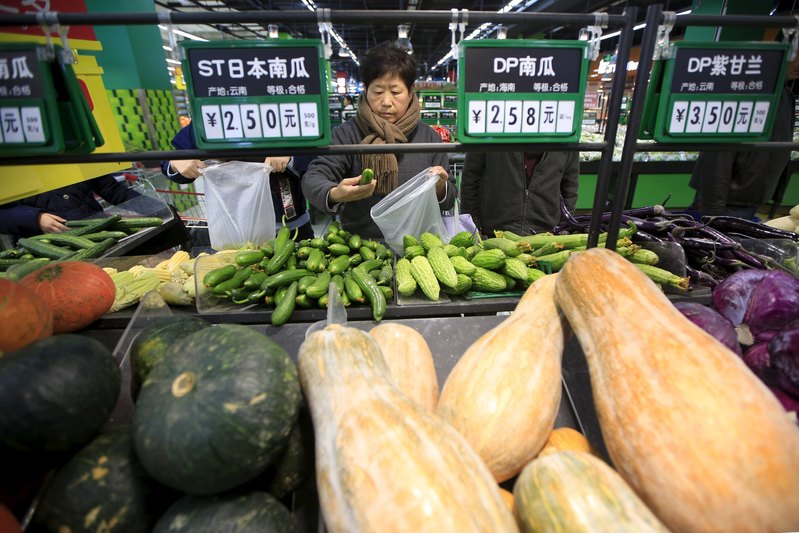 Consumers choose vegetables at a supermarket in Shanghai, China, in this March 10, 2016 file photo. REUTERS/Aly Song/Files

Consumer prices in March rose 2.3 percent, below a median forecast of 2.5 percent in a Reuters poll but equal to February's increase of 2.3 percent. Although the prior month's figure represented the fastest rise in more than a year, the increase was driven largely by sharp gains in food prices following an unexpectedly harsh winter.

Economists have been watching closely to see how inflation evolves in China this year following a prolonged easing campaign by the central bank beginning in late 2014, which has boosted credit, but has yet to result in substantial price increases.

Producer prices fell 4.3 percent in March, extending their decline to a full four years, but at a slower rate than forecasts of a 4.6 percent decline. Falling commodity prices and overcapacity in key industrial sectors have helped mire producer prices in a lengthy slump, although declines have eased in recent months.

A key factor supporting consumer prices, which have trended sideways around 1.5 percent year-on-year since late 2014, has been the relative strength of the labour market.

China grew at its slowest pace in more than two decades in 2015, as the economy struggled with an extended correction in the real estate market, weak global demand and high corporate debt levels.