Tesla down ahead of first quarterly report to include SolarCity 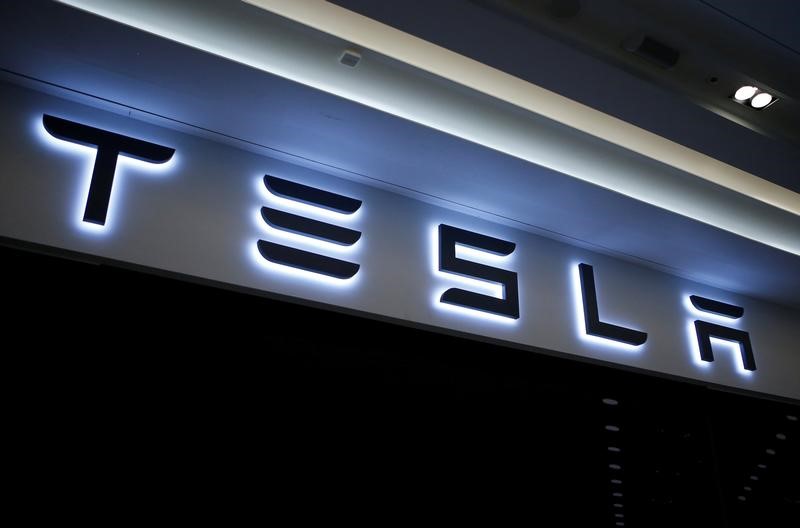 A Tesla logo is seen at its planned store in Hanam, South Korea, December 22, 2016. REUTERS/Kim Hong-Ji

SAN FRANCISCO (Reuters) - Shares of Tesla were down almost 1 percent on Wednesday ahead of the electric car maker's first quarterly report following its $2.6 billion acquisition of solar panel installer SolarCity.

Wall Street estimates for Tesla's fourth-quarter loss per share vary widely, potentially due in part to the deal. In the previous quarter, Tesla posted its first net profit in more than three years.

Over the past three months, the stock has enjoyed a 41 percent rally and is near record highs, while short bets against Tesla remain elevated despite nearly $2 billion in paper losses suffered by short sellers this year.

Options trading strategies suggest investors expect a 6.5 percent move in Tesla's stock - up or down - by Friday.

Musk, the largest shareholder in both companies, combined Tesla and SolarCity in a bid to create a clean energy powerhouse. More recently, the Silicon Valley billionaire became a key figure on President Donald Trump's business council.

"The recent run-up in Tesla stock has less to do, in our view, with anything around the near-term financials, and more to do with the nearly superhero status of Elon Musk," wrote Barclays analyst Brian Johnson in a note to clients on Wednesday.

A year ago, Musk said Tesla would become full-year profitable in 2016, a promise that helped the stock rebound from a two-year low. Since then, the shares have doubled. In afternoon trade on Nasdaq they were around $275.75.

In Wednesday's report after markets close, Wall Street will be looking for updates on Tesla's plan to launch volume production of its Model 3 sedan in the second half of this year. Tesla was set to begin test-building its Model 3 this past Monday, Reuters reported.