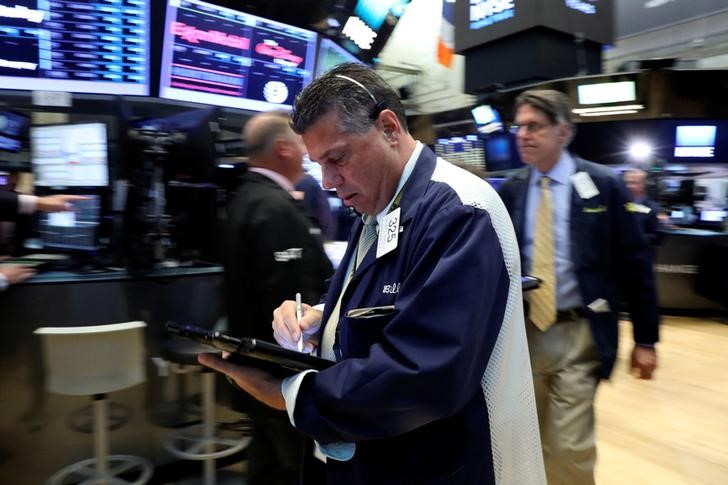 NEW YORK (Reuters) - Stocks ended little changed on Wall Street on Thursday as a deal between Sears and Amazon weighed on home improvement retailers while gains in Microsoft helped buoy the Nasdaq.

"I think a lot of earnings (beats) are due to the low-interest-rate environment. Once you see a tick up in rates, the earnings are going to be affected. But right now, it looks like it's going to continue. Earnings overall are very strong," said Anthony Conroy, president at Abel Noser in New York.

Microsoft (NASDAQ: MSFT) shares rose 0.9 percent in after-hours trading to $74.89 after it reported a quarterly profit that more than doubled, helped by a tax benefit and strong growth in its cloud business.

Overall earnings continue to beat expectations and major indexes closed Thursday at or near all-time highs. Analysts are estimating an 8.6 percent rise in second-quarter earnings and a 4.6 percent increase in revenue for the S&P 500 companies from a year earlier, according to Thomson Reuters I/B/E/S.

Despite the market's continued attention on business-friendly signs out of Washington, stocks did not react to the White House's announcement it had withdrawn or removed from consideration more than 800 proposed regulations that were never finalized during the Obama administration.

"I see no tangible evidence that these regulation pullbacks have helped the economy one iota.â

T-Mobile (NASDAQ: TMUS) gained as much as 3.3 percent after the wireless carrier's quarterly results topped analysts' estimates, but reversed course in the afternoon and closed down 1.4 percent at $61.12. Verizon (NYSE: VZ) rose 1.8 percent and AT&T (NYSE: T) added 1.1 percent.

Declining issues outnumbered advancing ones on the NYSE by a 1.01-to-1 ratio; on Nasdaq, a 1.14-to-1 ratio favored advancers.

About 5.92 billion shares changed hands in U.S. exchanges, compared with the 6.35 billion daily average over the last 20 sessions.