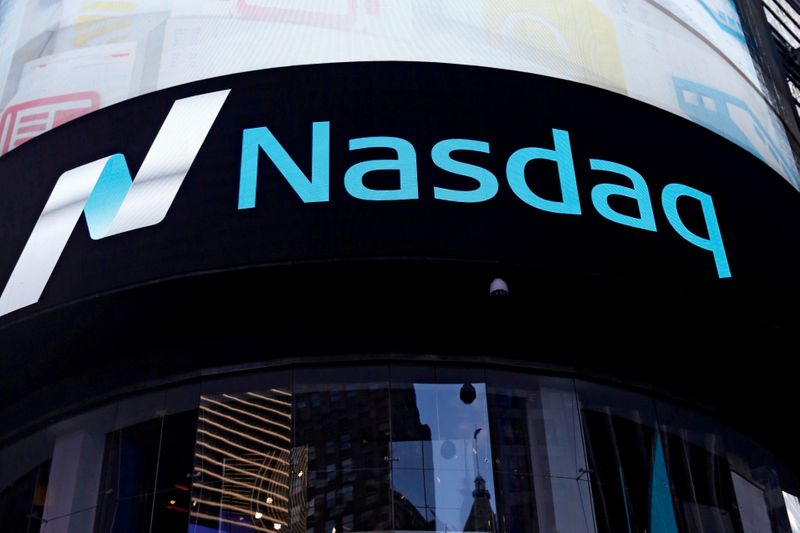 FILE PHOTO: FILE PHOTO: A view of the exterior of the Nasdaq market site in the Manhattan borough of New York City, U.S., October 24, 2016. REUTERS/Shannon Stapleton

GameStop Corp stock, which was at the center of volatile moves in late January by shares talked about on a Reddit forum, more than doubled with no obvious catalyst. Volume was more than two times the 10-day moving average.

Powell told lawmakers on Wednesday it may take more than three years to reach the central bank's inflation goals, a sign the Fed plans leave interest rates unchanged for a long time to come.

"What's driving the stock market is the fiscal stimulus, the dovish Fed, the real strong, strong earnings that we're seeing, as well as the fact that we're going to have a third vaccine," said Richard Saperstein, chief investment officer at Treasury Partners.

The U.S. Food and Drug Administration said on Wednesday Johnson & Johnson's one-dose COVID-19 vaccine appeared safe and effective in trials, paving the way for its approval for emergency use as soon as this week.

Investors have focused on rising U.S. yields and their potential impact on growth stocks. Saperstein said higher yields could pressure stocks but would not derail the upward trend.

"I don't believe that the 10-year yield going from 1% to 1.5% is going to alter the calculus of owning large technology stocks," said Saperstein.

Value-oriented stocks have enjoyed a bit of a bounce recently, and the S&P 500 Value index rose for a fourth straight day.

The S&P 500 financial sector hit an all-time peak, while other cyclical stocks including industrials, energy and materials also rose.

The S&P 500 Growth index, which includes most of the high-flying technology-related stocks, has come under pressure in the last few days due to valuation concerns, elevated Treasury yields and an investment shift into more economy-sensitive parts of the market.

Microsoft Corp, Amazon.com Inc and Apple Inc were down 0.4% to 1.1%, while Facebook, Netflix Inc and Alphabet Inc reversed earlier declines.

Growth-oriented stocks are particularly sensitive to rising yields as their value rests heavily on future earnings, which are discounted more deeply when bond returns go up.

Tesla Inc gained 6.2% after star investor Cathie Wood's Ark Invest fund bought a further $171 million worth of the company's shares in the wake of a sharp fall in the electric-car maker's stock.

Lowe's Cos Inc slid 3.7% as it stuck by its 2021 outlook of a $4 billion to $8 billion drop in revenue, even after reporting blow-out fourth quarter results.

Advancing issues outnumbered declining ones on the NYSE by a 2.10-to-1 ratio; on Nasdaq, a 2.62-to-1 ratio favored advancers.

Volume on U.S. exchanges was 13.68 billion shares, compared with the 16.01 billion average for the full session over the last 20 trading days. (This story fixes spelling error in headline)