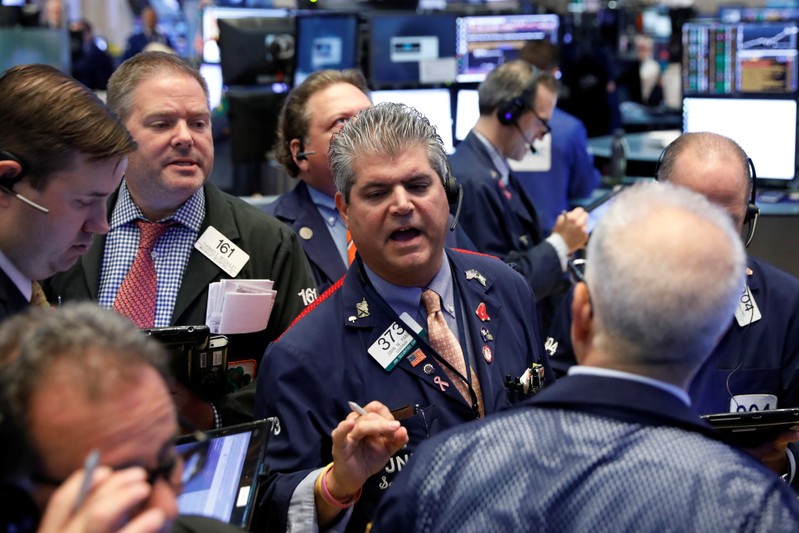 By Caroline Valetkevitch and James Thorne

NEW YORK (Reuters) - U.S. stocks slid on Friday as a deepening economic crisis in Turkey dragged on bank shares and triggered a move out of riskier assets.

The Dow and S&P 500 posted declines for the week following five straight weeks of gains, but the S&P 500 remains just 1.4 percent below its record high from Jan. 26.

A drop in technology shares added to the day's bearish tone. The S&P technology index <.SPLRCT> fell 0.8 percent, with Intel (NASDAQ: INTC) down 2.6 percent after Goldman Sachs downgraded the stock to "sell."

A slump in the Turkish lira

"It was a classic risk-off move," said Quincy Krosby, chief market strategist at Prudential Financial in New Jersey. "You worry about the collateral damage. You worry about the effects on Europe. You have banks losing because the 10-year U.S. Treasury (yield) came down."

For the week, the Dow fell 0.6 percent and the S&P 500 dipped 0.3 percent. The Nasdaq gained 0.3 percent for the week after strong gains in some technology shares.

Shares of trade-sensitive companies also declined, including Boeing (NYSE: BA), 3M (NYSE: MMM) and Caterpillar (NYSE: CAT), which were all down at least 1 percent.

Data on Friday showed U.S. consumer prices rose in July and the underlying trend continued to strengthen, pointing to a steady increase in inflation pressures.

Declining issues outnumbered advancing ones on the NYSE by a 2.10-to-1 ratio; on Nasdaq, a 1.51-to-1 ratio favored decliners.

About 6.7 billion shares changing hands on U.S. exchanges. That compares with the 6.4 billion-share daily average for the past 20 trading days, according to Thomson Reuters data.