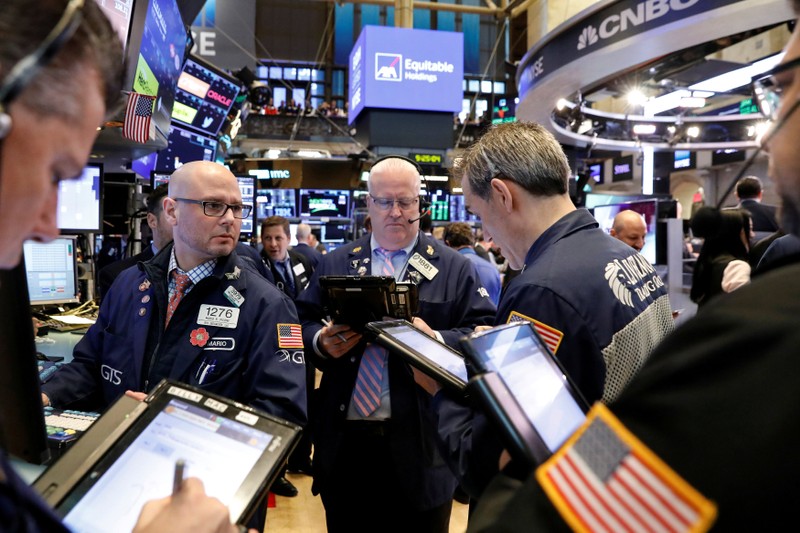 NEW YORK (Reuters) - U.S. stocks rose on Monday and gains in industrials helped propel the Dow to a more than two-month closing high, after a truce between the United States and China calmed fears that a trade war might be imminent.

U.S. Treasury Secretary Steven Mnuchin's comments over the weekend that the two countries had put the prospect of a trade war "on hold" and agreed to hold more talks to boost U.S. exports to China boosted stocks at the opening, with the Dow Jones Industrial Average <.DJI> leading the charge higher.

Mnuchin said on Sunday the United States and China had agreed to drop their tariff threats, and China on Monday praised a significant dialing back of tensions.

"The big news over the weekend was that a trade war was averted, and so we had an adjustment, covering bets that there would be negative news coming out of the discussion," said Bucky Hellwig, senior vice president at BB&T Wealth Management in Birmingham, Alabama. "We're seeing companies that do more of their business on an international basis do well."

The S&P industrial sector <.SPLRCI> advanced 1.5 percent. Boeing Co (NYSE: BA), which sells about a fourth of its commercial aircraft to Chinese customers, jumped 3.6 percent. It was the biggest percentage gainer on the Dow and lifted the blue-chip index.

The Russell 2000 <.RUT> rose 0.7 percent to hit a record closing high for a fourth straight session, though the index of small-cap companies underperformed large caps.

Not all U.S. business leaders welcomed the trade war truce, with some cautioning that Washington would find it tough to rebuild momentum to address what they see as troubling Chinese policies.

Micron Technology Inc (NASDAQ: MU) rose 3.9 percent, the most on the S&P, after the chipmaker lifted its current-quarter forecast.

Advancing issues outnumbered declining ones on the NYSE by a 2.43-to-1 ratio; on Nasdaq, a 1.59-to-1 ratio favored advancers.

About 5.8 billion shares changed hands on U.S. exchanges. That compares with the 6.6 billion daily average for the past 20 trading days, according to Thomson Reuters data.