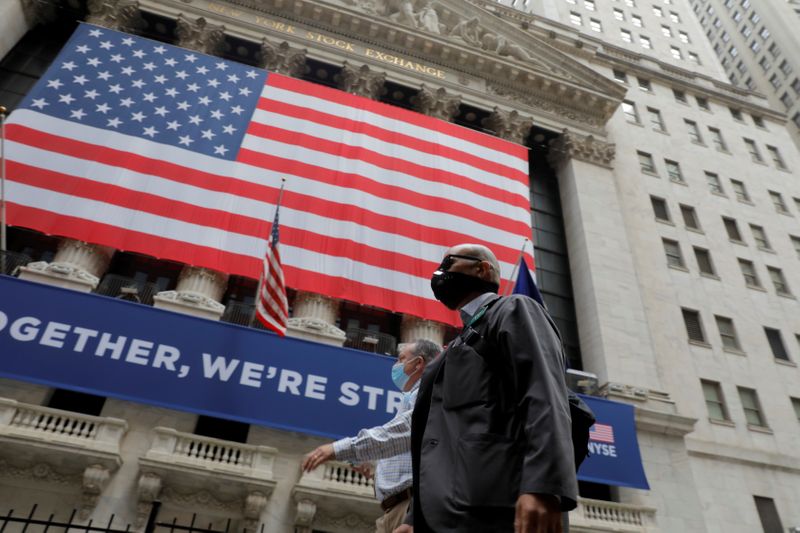 FILE PHOTO: Traders walk past the New York Stock Exchange as the building opens for the first time since March while the outbreak of the coronavirus disease (COVID19) continues in the Manhattan borough of New York, U.S., May 26, 2020. REUTERS/Lucas Jackso

By Chuck Mikolajczak and Gertrude Chavez-Dreyfuss

NEW YORK (Reuters) - The Nasdaq closed lower on Friday, as data showed a sharp slowdown in U.S. employment growth and investors worried lawmakers would fail to agree on another fiscal stimulus bill to bolster the economy from a coronavirus-induced recession.

The S&P 500 and the Dow Jones index ended flat to slightly higher on the day.

With the benchmark S&P 500 index now about 1.5% below its record high, defensive sectors including utilities <.SPLRCU> and real estate <.SPLRCR> were among the gainers. Tech-related <.SPLRCT> stocks, which have fueled a Wall Street rally since March, posted the biggest declines and helped push the Nasdaq down more than 1% during the session.

Along the same line, value names, which have been unable to close the performance gap with growth stocks in recent years, advanced, with financials <.SPSY> gaining more than 2%. The S&P 500 value index <.IVX> rose 1.13%, while the S&P 500 growth index <.IGX> fell 0.63%.

However, the figure still topped economists' expectations and analysts said it could take the pressure off Congress to agree on a relief bill after weeks of wrangling. Differences have partly centered around continuing an extra $600-per-week in unemployment benefits.

Congressional Democrats on Friday offered to reduce a proposed coronavirus aid package by $1 trillion if Republicans would add a trillion to their counter-offer, but President Donald Trump's negotiators rejected the idea on Friday as the latest round of talks ended without a deal.

"The bottom line reality is that unemployment is through the roof with respect to historical averages, we are still in a pandemic with no cure and the politicians have promised another $1 trillion or more to the American public," said Mike Zigmont, head of Trading at Harvest Volatility Management in New York.

"It would be political suicide if they donât deliver that," he added.

The declines snapped the Nasdaq's seven-session streak of gains, with the Dow and S&P falling after rising for five straight days. Each of the three major averages posted weekly gains.

With the second-quarter corporate earnings season largely over, about 82% of S&P 500 companies that have reported so far have beaten dramatically lowered estimates, with earnings on average coming in 22.5% above expectations, the highest on record.

T-Mobile US Inc (NASDAQ: TMUS) jumped 6.47% as it added more-than-expected monthly phone subscribers and said it had overtaken rival AT&T Inc (NYSE: T) as the second-largest U.S. wireless provider. The stock was the biggest gainer on the S&P communication services index <.SPLRCL>.

Uber (NYSE: UBER) fell 5.21% as demand for its ride-hailing trips only marginally recovered from pandemic rock-bottom in the second quarter, even as its food-delivery segment saw double the orders.

Meanwhile, Trump late on Thursday unveiled sweeping bans on U.S. transactions with the Chinese owners of messaging app WeChat and video-sharing app TikTok. In response, China said the companies complied with U.S. laws and warned Washington would have to "bear the consequences" of its action.

Advancing issues outnumbered declining ones on the NYSE by a 1.43-to-1 ratio; on Nasdaq, a 1.31-to-1 ratio favored advancers.

About 9.78 billion shares changed hands in U.S. exchanges, compared with the 10.4 billion daily average over the last 20 sessions.