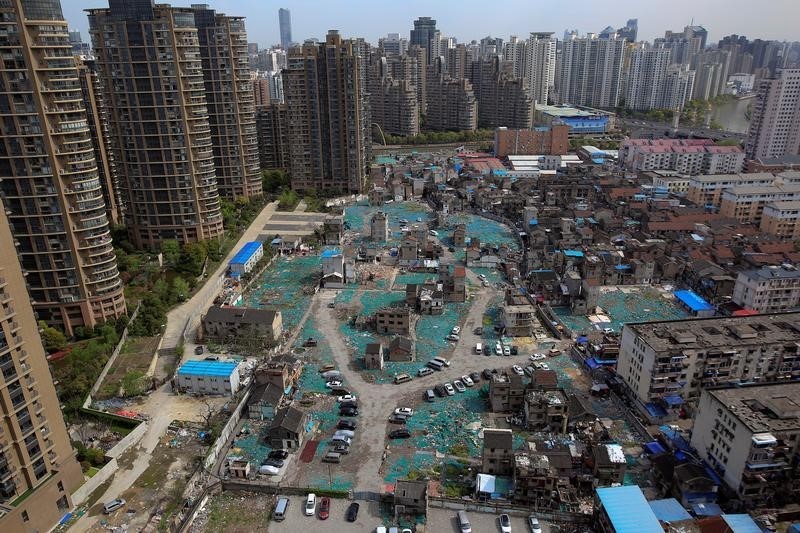 BEIJING (Reuters) - Home price rises in China's biggest cities showed signs of easing in July, adding to concerns that one of the economy's key growth drivers is losing steam but offering some relief for policymakers worried about property bubbles.

A robust recovery in home prices and sales gave a stronger-than-expected boost to the world's second-largest economy in the first half of the year, partly offsetting weak exports.

But some analysts say slowing price growth and weakening property investment suggest the rebound may have peaked, as more local governments tighten restrictions on home purchases in a bid to keep fast-rising prices in check.

"We believe the housing market is cooling down from the rebound in the first half. Property investment will continue to drop, which will put more pressure on the economy in the future," said Wendy Chen, an economist at Nomura.

Average new home prices in China's 70 major cities rose 7.9 percent in July from a year earlier, an official survey showed on Thursday, compared with a 7.3 percent increase in June.

But on a monthly basis, prices rose just 0.8 percent in July, the same pace as in June, which was the slowest since April, according to a Reuters calculation based on data issued by the National Bureau of Statistics (NBS).

Prices also stalled or fell in more cities than in June.

Some of China's largest cities continued to see eye-popping annual gains, with southern boomtown Shenzhen rising the most by 40.9 percent, but monthly increases have moderated.

Prices rose 20.7 percent and 27.3 percent on-year in Beijing and Shanghai, but were up just 1.5 percent and 2 percent from June.

The market also remains uneven, with some smaller cities in hard-hit industrial regions such as "rustbelt" Liaoning province continuing to see price declines. In many of those areas, local governments are still trying to stimulate demand.

"Our land was bought at reasonable prices, and we will speed up new launches going forward. Land prices are at high levels now, but government is generally still supportive to the sector," Shao Mingxiao, CEO of Longfor Properties <0960.HK>, said at a company earnings conference on Wednesday.

But prices and sales have started to cool as China's biggest cities impose curbs on home purchases, and as smaller cities struggle to clear large inventories of unsold homes.

For July, property investment growth dropped to 1.4 percent from a year earlier, according to Reuters calculations, compared with 3.5 percent growth in June.

State-run newspapers, meanwhile, have been publishing a flurry of stories and commentaries on housing bubbles.

The Securities Times on Tuesday warned of the risks to the banking sector and the economy of being overly reliant on the property market, noting that household loans, which are mainly mortgages, made up over 90 percent of new loans in July.

Growth in China's money supply and credit also is slowing, potentially taking more wind out of the housing market's sails, according to a BofA Merrill Lynch Global Research report, titled "The best days are likely over for China's housing market."

"With development focused primarily on those regions already suffering from excess capacity, China is playing a dangerous game," the consulting firm said in a report last week.