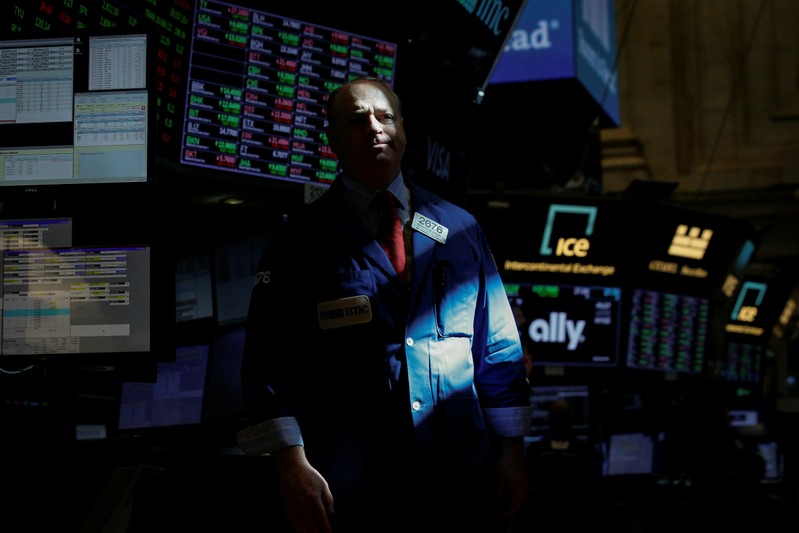 A trader works on the floor of the New York Stock Exchange (NYSE) in New York, U.S., July 18, 2018. REUTERS/Brendan McDermid

"Yields are climbing across the board, which is a sign of a strengthening economy," said Oliver Pursche, chief market strategist at Bruderman Asset Management in New York. "And earnings have been very strong."

Analysts now forecast profit growth of about 22 percent for the second-quarter earnings season, up from 20.7 percent at the start of the month, according to Thomson Reuters I/B/E/S.

Also, European Commission President Jean-Claude Juncker is scheduled to meet with Trump on Wednesday over the imposition of import tariffs, though he will not arrive in Washington with a specific trade offer.

But some investors worried about the effects of international trade tensions on the U.S. dollar, which has climbed in recent months. Several U.S. multinationals are reevaluating their currency hedging strategies.

Amazon.com Inc (NASDAQ: AMZN) slipped 0.6 percent and was the biggest drag on the Nasdaq and the S&P 500 after Trump renewed his attacks on the retailer.

Tesla Inc (NASDAQ: TSLA) shares fell 3.3 percent after a report that the company has asked some suppliers to refund previous payments by the company in a bid to turn a profit.

LifePoint Health Inc (NASDAQ: LPNT) shares soared 35.5 percent and lifted shares of hospital operators after the company agreed to be bought by Apollo Global Management (NYSE: APO) in a deal valued at about $5.6 billion.

Declining issues outnumbered advancing ones on the NYSE by a 1.38-to-1 ratio; on Nasdaq, a 1.06-to-1 ratio favored decliners.

Volume on U.S. exchanges was 5.50 billion shares, compared to the 6.16 billion average for the full session over the last 20 trading days.