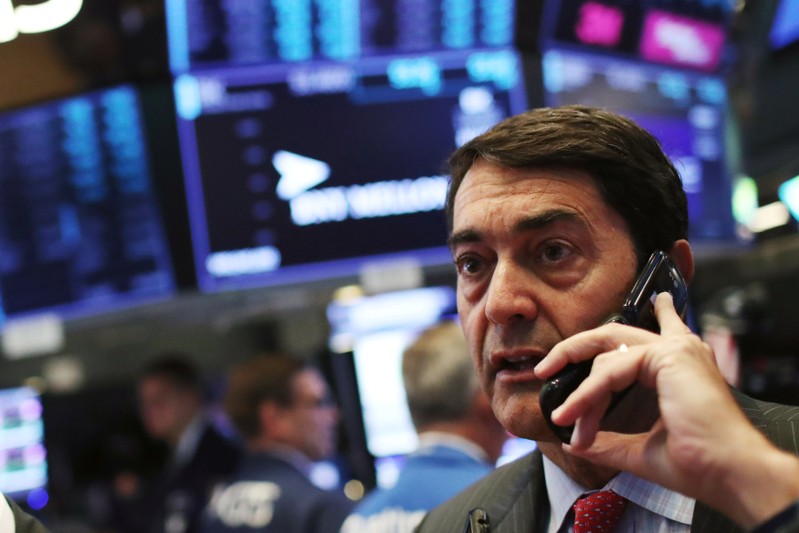 Traders work on the floor of the New York Stock Exchange shortly after the opening bell in New York, U.S., July 31, 2018. REUTERS/Lucas Jackson

"It's a good sign for the market and the economy," said Kim Forrest, senior portfolio manager at Fort Pitt Capital Group in Pittsburgh. "Because even though today we're talking about the impact of trade or currency war, an issue with China, Apple, who makes most of their products in China, is hitting this."

The smartphone maker led the S&P technology index <.SPLRCT> 1.4 percent higher, the biggest percentage gainer among the 11 major sectors of the S&P 500.

"The tariff rhetoric is always important to monitor," said Bucky Hellwig, senior vice president at BB&T Wealth Management in Birmingham, Alabama. "But more importantly, what's the effect on the market?"

"We get a sell-off on some event, and the market comes right back," Hellwig added.

For the second-quarter reporting season, 79.7 percent of the 380 companies in the S&P 500 that reported so far have beaten consensus estimates, according to Thomson Reuters data.

Advancing issues outnumbered declining ones on the NYSE by a 1.41-to-1 ratio; on Nasdaq, a 1.58-to-1 ratio favored advancers.

Volume on U.S. exchanges was 6.66 billion shares, compared with the 6.25 billion-share average over the last 20 trading days.