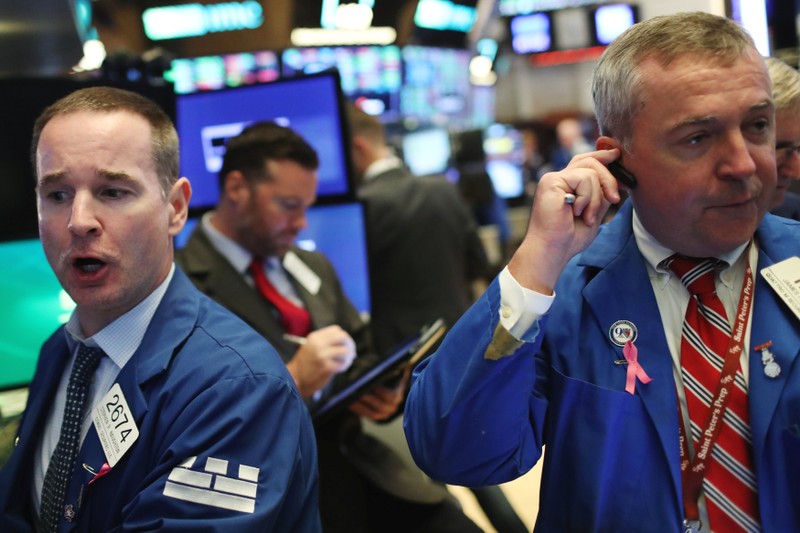 Traders work on the floor of the New York Stock Exchange shortly after the opening bell in New York, U.S., July 31, 2018. REUTERS/Lucas Jackson

NEW YORK (Reuters) - The S&P 500 and Dow slipped on Wednesday as gains in Apple shares were offset by a drop in energy and industrial companies, while the U.S. Federal Reserve remained on course for an expected interest rate hike in September.

The central bank left rates unchanged, and reiterated its view that the U.S. economy is growing and the job market is strengthening, and inflation continues to hover near the Fed's 2 percent target since it last raised rates in June.

"The Fed demonstrated that they are willing to let the economy run a little hot as long as they donât foresee a significant spike in inflation which would potentially serve as a headwind for the current bull market run," said Bob Baur, chief global economist at Principal Global Investors.

While technology stocks pulled the Nasdaq into positive territory and gave a boost to the S&P and the Dow, trade worries intensified as the Trump administration proposed hiking tariffs on imports from China.

Officials told reporters that Trump had directed U.S. Trade Representative Robert Lighthizer to consider a tariff rate increase on $200 billion worth of Chinese goods to 25 percent from 10 percent as part efforts to ensure that it has "the right tools in place in order to encourage China to change its actions."

China called the move "blackmail," and warned it would respond in kind.

"It is clear that a lot of businesses are growing concerned about the direction that (the tariff dispute) is heading," said Bernard Baumohl, chief global economist at the Economic Outlook Group in Princeton, New Jersey. "If the trade tensions continue right up to the midterm elections, it would be disastrous for the GOP." The U.S. congressional midterm elections will be held on Nov. 6.

Of the 11 major sectors of the S&P 500, eight ended the session in negative territory.

With the second-quarter earnings reporting season nearly two-thirds complete, analyst estimates for S&P 500 profit growth are now at 23.3 percent, up from 20.7 percent a month ago.

Shares of Tesla Inc (NASDAQ: TSLA) were up in choppy trading after the bell following the electric automaker's second-quarter earnings report.

The energy sector <.SPNY> was pressured by a drop in crude prices

Declining issues outnumbered advancing ones on the NYSE by a 1.74-to-1 ratio; on Nasdaq, a 1.07-to-1 ratio favored decliners.

Volume on U.S. exchanges was 6.83 billion shares, compared with the 6.21 billion average for the full session over the last 20 trading days.