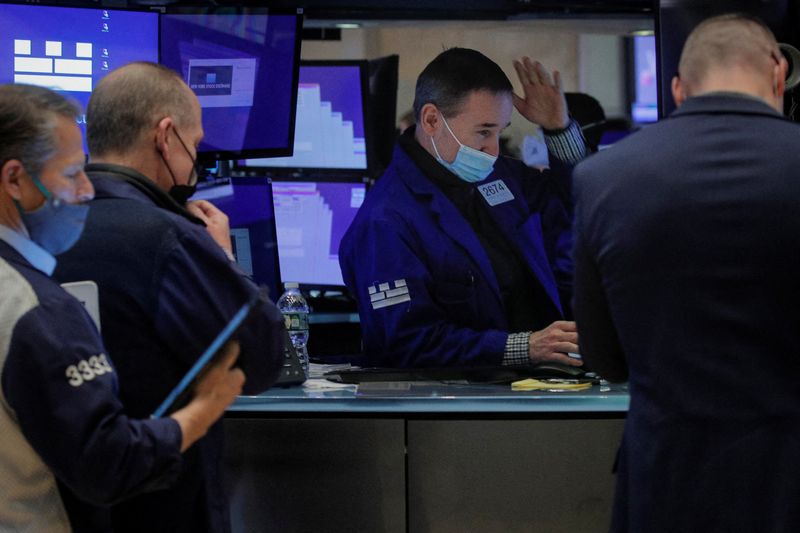 (Reuters) - The Dow closed lower on Friday with a big drag from financial stocks as investors were disappointed by fourth quarter results from big U.S. banks, which cast a shadow over the earnings season kick-off.

The Nasdaq and the S&P regained lost ground in afternoon trading to close higher. Meanwhile the consumer discretionary stocks put pressure on the indexes throughout the session after morning data showed a December decline in retail sales and a souring of consumer sentiment.

The S&P 500 bank subsector, which hit an intraday high in the previous session, closed down 1.7%. The sector has been outperforming the S&P recently as investors bet the Federal Reserve's expected interest rate hikes will boost bank profits.

"The bar was very high going into (JPMorgan) results. On the surface it was good but, under the hood, not so much," said Michael James, managing director of equity trading at Wedbush Securities in Los Angeles. In the interest rate hiking cycle expected this year "positioning was very crowded on the long side" going into the earnings season.

For consumer stock weakness, James pointed to "clearly disappointing" retail sales, which dropped 1.9% last month due to shortages of goods and an explosion of COVID-19 infections. Separate data showed soaring inflation hit U.S. consumer sentiment in January, pushing it to its second lowest level in a decade.

Retail sales and bank loan growth raised doubts about the economic outlook for the current quarter and 2022 for Keith Buchanan, portfolio manager at Globalt in Atlanta.

"The question is, does the economy have enough strength to get through the risk Omicron brings as fiscal and monetary stimulus is rolling off," Buchanan said.

At the end of the session, four out of eleven S&P sectors gained ground with energy leading gains.

An afternoon rally pushed the Nasdaq and the S&P to closing gains with help from rate-sensitive growth sectors with technology closing up 0.89% and communications services adding 0.53%.

Analysts see S&P 500 companies earnings rising 23.1% in the fourth quarter, according to IBES data from Refinitiv.

One bright spot in the bank sector on Friday, however, was Wells Fargo & Co, which rallied after posting a bigger-than-expected rise in fourth-quarter profit.

Las Vegas Sands rallied 14.2% while Melco Resorts advanced 16.6% and Wynn Resorts closed up 8.6% after Macau's government capped the number of new casino operators allowed to operate to six with an operating period of up to 10 years.

U.S. stock markets will remain shut on Monday for the public holiday in honor of Martin Luther King Jr.

Declining issues outnumbered advancing ones on the NYSE by a 1.63-to-1 ratio; on Nasdaq, a 1.19-to-1 ratio favored decliners.

On U.S. exchanges, 10.74 billion shares changed hands compared with the 10.34 billion average for the last 20 sessions.