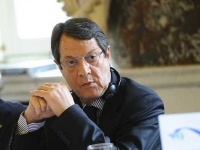 Cypriot President Nicos Anastasiades and the European Union (EU), the European Central Bank (ECB), and the International Monetary Fund (IMF) were in heavy negotiation up until the deadline.

Largely state-owned Popular Bank of Cyprus (Laiki) will wind down with deposits of â¬100,000 and less shifting to the Bank of Cyprus, creating a "good bank" in the process.

Deposits over â¬100,000 aren't guaranteed under EU law. Those will be used to resolve Laiki's debts and recapitalize the Bank of Cyprus.

Jobs at Laiki will be lost while senior bondholders and officials will be left with nothing.

Some believe the deal was better than outside suggestion, which would have impacted smaller depositors as well. Cypriot banks are still currently closed.

On the news, the Dow Jones, the S&P 500, and the Nasdaq are all modestly higher following a trying string of trading sessions last week.