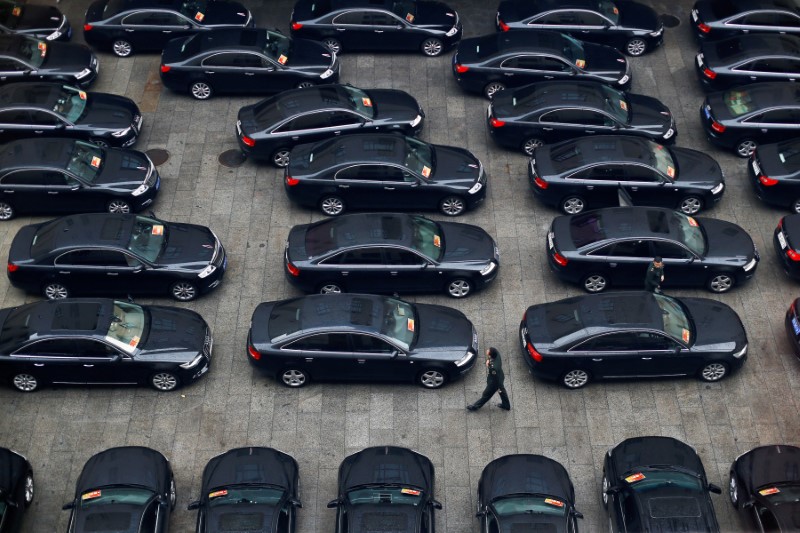 FILE PHOTO: Cars are parked at the Great Hall of the People during the opening session of the 19th National Congress of the Communist Party of China in Beijing, China October 18, 2017. REUTERS/Thomas Peter/File Photo

By Norihiko Shirouzu and Adam Jourdan

BEIJING/SHANGHAI (Reuters) - China will scrap a limit on foreign ownership of automotive ventures by 2022 in a major policy shift to open up the world's biggest car market, even as trade tensions simmer between Washington and Beijing.

In a move welcomed by Germany's powerful car industry, China's state planner said on Tuesday it would remove foreign ownership caps for companies making fully electric and plug-in hybrid vehicles in 2018, for makers of commercial vehicles in 2020, and the wider car market by 2022.

"We believe a more free and flexible business environment will benefit both Chinese and foreign companies in China and the Chinese economy. BMW will continue pursuing mutual benefit and win-win solutions with the local partners," the carmaker said.

BMW added it remained committed to expanding a joint venture with China's BBA and was still discussing how to structure a new partnership for its Mini brand with China's Great Wall Motors.

Analysts said the main beneficiaries, at least in the short term, would be manufacturers focused on new-energy vehicles, including U.S. electric carmaker Tesla (NASDAQ: TSLA), which has been seeking to set up its own plant in Shanghai.

Traditional automakers will need to wait longer for any direct impact and could face more risks than opportunities in ditching their joint venture structures, said James Chao, Asia-Pacific chief at consultancy IHS Markit.

"Foreign companies may already be in a box (in China)," said Chao, adding the joint venture structure was now so ingrained that many might not want to change it.

"While getting a bigger share could be advantageous in terms of boosting profits, they may actually be already too dependent on their Chinese partners to sever those ties."

A spokesman for Germany's Volkswagen

A senior General Motors Co (NYSE: GM) executive said last week the U.S. carmaker, even without ownership caps, would not cut ties with local partner SAIC Motor Corp <600104.SS>. The source, who asked to remain anonymous because of the sensitivity of the matter, added GM would not be as successful in China on its own.

In a statement on Tuesday, GM said its growth in China was "a result of working with our trusted joint venture partners. We will continue to work with our partners to provide high-quality products and services to consumers."

A Ford Motor Co (NYSE: F) said the automaker was encouraged by the announcement and looked forward to learning more. Japan's Nissan Motor Co <7201.T> said it would monitor developments and plan accordingly.

Honda Motor Co <7267.T> said its China business had grown on the back of strong local tie-ups. "At the moment we have no plans to change our capital relationship," a spokesman said.

China will also scrap limits on foreign ownership in the shipbuilding and aircraft industries in 2018, the National Development and Reform Commission (NDRC) said.

Airbus (NYSE: AIR) and Boeing (NYSE: BA) did not immediately respond to requests for comment.

China, which said the easing of autos rules was unrelated to that dispute, is keen to portray itself as open for business. Its ties with the world's largest economy, though, are becoming increasingly fraught.