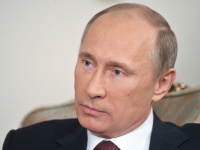 S&P Reduces Russian Federation outlook to Negative from Stable. Below is the full report:

â¢ We are therefore revising the outlook on our long-term sovereign credit ratings on Russia to negative from stable.

â¢ We are affirming our 'BBB/A-2' foreign currency and 'BBB+/A-2' local currency ratings on the Russian Federation.

As a "sovereign rating" (as defined in EU CRA Regulation 1060/2009 "EU CRA Regulation"), the ratings on the Russian Federation are subject to certain publication restrictions set out in Art 8a of the EU CRA Regulation, including publication in accordance with a pre-established calendar (see "Calendar Of 2014 Publication Dates For EMEA Sovereign, Regional, And Local Government Ratings," published Dec. 30, 2013, on RatingsDirect). Under the EU CRA Regulation, deviations from the announced calendar are allowed only in limited circumstances and must be accompanied by a detailed explanation of the reasons for the deviation. In this case, the reason for the deviation is the material and unanticipated intensification of geopolitical risks since our most recent release on Dec. 13, 2013, the introduction of sanctions, and the increased financial and economic downside risks to Russia related to these events. The next scheduled rating publication on the sovereign rating of the Russian Federation will be on April 25, 2014.

On March 20, 2014, Standard & Poor's Ratings Services revised its outlook on the Russian Federation (Russia) to negative from stable. At the same time, we affirmed our 'BBB/A-2' foreign currency and 'BBB+/A-2' local currency long- and short-term sovereign credit ratings on Russia.

The outlook revision reflects our view of the material and unanticipated economic and financial consequences that EU and U.S. sanctions could have on Russia's creditworthiness following Russia's incorporation of Crimea, which the international community currently considers legally to be a part of Ukraine.

In February 2014, pro-Russian forces took control of Crimea. As a consequence, on March 6, the European Union (EU) and the U.S. agreed on an initial round of sanctions, as part of a staged approach to imposing sanctions on Russia. On March 16, a referendum was held in Crimea in which approximately 97% of voters reportedly were in favor of Crimea joining Russia. The following day, the EU and U.S. announced that they viewed the referendum as illegitimate and sanctioned certain Russian and Ukrainian nationals through travel bans and asset freezes. On March 18, Russia's president, Vladimir Putin, signed a decree incorporating Crimea into the Russian Federation which was ratified by parliament today.

We expect that the EU and U.S. will impose further sanctions.

In our view, the deteriorating geopolitical situation has already had a negative impact on Russia's economy. The Central Bank of the Russian Federation appears to have abandoned its policy of increased currency flexibility and limited intervention in the foreign-exchange market. The Central Bank is now focused on stabilizing financial markets in light of the inflationary impact of the around 10% depreciation of the currency so far this year and the significant capital outflow, which we estimate at about $60 billion in the first quarter of 2014, similar to the level for the whole of 2013. The Central Bank also called an extraordinary meeting in March, raising its benchmark interest rate by 150 basis points to 7%.

Economic growth in Russia slowed to 1.3% in 2013, the lowest rate since 1999--excluding the economic contraction in 2009. We expect a further modest deceleration in growth this year and have lowered our GDP growth forecasts for 2014 and 2015 to 1.2% and 2.2%, respectively, from 2.2% and 3.0% in December 2013. In our view, there is a significant downside risk that growth will fall well below 1% if the uncertainties caused by the geopolitical tensions do not subside in the near term.

In our view, there is a material risk that the conflict between Russia and Ukraine could extend beyond Crimea and that violence between pro- and anti-Russian protesters could spread to other cities in Eastern Ukraine. Should the situation deteriorate, we believe further and wider sanctions could be imposed against Russian institutions and individuals, potentially including trade restrictions. In our view, these sanctions could further undermine Russia's economic growth prospects. We note, however, that sanctions, particularly those that might be imposed by EU countries, could be tempered by European economic trade and energy interests.

Our ratings on Russia continue to be supported by its relatively strong external and government balance sheets. The ratings remain constrained by structural weaknesses in Russia's economy, in particular the strong dependence on hydrocarbons and other commodities. Further constraints are what we view as comparatively weak governance and economic institutions that impede the economy's competitiveness, investment climate, and business environment.

The Russian government's finances continue to be buoyed by strong commodity revenues, particularly from oil. These account for almost one-half of the government's budget revenues, but also leave it exposed to swings in commodity prices. To mitigate this vulnerability, the government has instituted a fiscal rule from 2013, which caps government expenditure based on long-term historical oil prices. This fiscal rule is designed to lead to the accumulation of assets in times of high oil prices, and to the drawing on fiscal assets in times of low oil prices, reducing the procyclicality of fiscal policy. In our view, the government's commitment to this fiscal rule will likely be significantly tested by the recent further deterioration in growth prospects, while off-budget measures to support additional spending could also increase. We estimate Russia's 2013 general government budget to have recorded a deficit of 0.6% of GDP. Based on our expectation that commodity revenues will decline slightly on the back of a slightly weaker oil price (falling to $95 by 2015), we think the general government deficit will gradually worsen, reaching 1.5% of GDP by 2016, just outside the level targeted by the fiscal rule, and implying an average annual change in general government debt of 1.5% of GDP over 2013-2016.

Russia's aging population will be a source of considerable medium- to long-term fiscal pressure. In a no-policy-change scenario, we expect the aging of the population to add more than 10% of GDP to government spending by 2050 compared with 2010 levels. While the government has been adjusting pension system parameters, it has so far shied away from more decisively tackling the issue. We now estimate the Russian government to be in a marginal net debtor position due to revised data on the outstanding stock of gross general government debt. Nevertheless, low levels of gross debt imply low general government interest payments at about 2% of revenues during 2014-2016.

Commodity exports are also behind Russia's persistent current account surpluses, resulting in a net external asset position of about 4% of GDP in 2014. Measured in terms of narrow net external debt, that is, external debt minus liquid external assets held by the public and banking sector, we expect Russia to be in a small net external creditor position. This strong external asset position has been declining since reaching a peak of 34% in 2009. We note, however, that due to consistently negative errors and omissions in Russia's balance of payments (averaging almost $8 billion annually, or 1.5% of CAR in 2007 to 2013) the reported net asset position is considerably lower than implied by the large current account surpluses.

We expect the current account surpluses to disappear by 2015, owing to imports rising faster than exports. Further ruble weakness could weigh on imports and keep current account deficits from occurring a little later, but we believe the longer-term trend of a weakening current account will remain in place even so. Gross external financing needs (current account payments plus short-term external debt by remaining maturity) will amount to 70% of CARs and usable reserves in 2014, in our view. Dependence on commodity exports results in terms-of-trade volatility, although past experience has shown that imports tend to adjust strongly, offsetting part of a commodity price-induced drop in export revenue.

Russia's political institutions remain comparatively weak and political power is highly centralized. Protesters, opposition members, nongovernmental organizations, and liberal members of the political establishment have come under increasing pressure. We do not expect the government to decisively and effectively tackle the long-standing structural obstacles to stronger economic growth over our forecast horizon (2014-2017). These obstacles include high perceived corruption, comparatively weak rule of law, the state's pervasive role in the economy, and a challenging business and investment climate.

The negative outlook reflects our view that there is at least a one-in-three chance that we could reassess the risks to Russia's creditworthiness based on its deteriorating external profile and reduced monetary policy flexibility. As a result, we could lower our ratings on Russia within the next 24 months. Geopolitical reaction to Russia's incorporation of Crimea could further reduce the flow of potential investment and negatively affect already weak economic growth, which would provide a further basis for lowering the ratings. Similarly, we could equalize the local and foreign currency ratings on Russia if we were to view Russia's transition toward a more flexible exchange rate regime as having stalled.

We could revise the outlook to stable if Russia's economy were to prove resilient to the current challenges, resulting in a return to a policy of a more flexible exchange rate, and if its external and fiscal buffers were to remain in line with our current expectations.