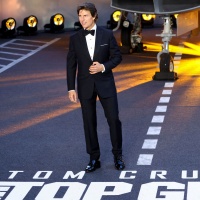 Movie stocks rose in early trading Tuesday following the first trading day back after the memorial weekend following the strong debut of the much anticipated 'Top Gun: Maverick' movie. The early gains have since evaporated amid broad market weakness.

The movie broke box office records beating Disney’s 'Pirates of the Caribbean: At World’s End' for the Memorial Day opening 4-day record in the US box office with $156M. It is also actor Tom Cruise's first $100 million opening weekend.

AMC (NYSE: AMC) said it posted "the best Memorial Day weekend domestic box office performance in history by a significant margin," with more than 3.3 million guests watching the movie at an AMC theatre over the weekend.

“Our sincerest congratulations to Tom Cruise and the entire creative and artistic team who have given us TOP GUN: MAVERICK. They have delivered a movie for the ages, and one that will be talked about with affection and even reverence for decades and decades to come. Tom Cruise continues to be one of theatrical exhibition’s greatest allies, and AMC is enormously grateful to him for his tireless and indefatigable efforts to support the cinema," said Adam Aron, Chairman, and CEO of AMC.

A few weeks ago, it was revealed that legendary investor Warren Buffet's Berkshire Hathaway had invested $2.6 billion in Paramount, acquiring almost 69 million shares.