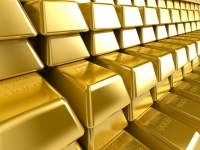 Weighing in to start the new year with the the long and short of gold investing is noted gold bull Peter Schiff.

THE LONG AND THE SHORT OF GOLD INVESTING

There are two types of gold investors: those trying to make money on short-term market timing and those looking for long-term asset preservation. It was the fear-driven trading of the former that helped gold break $1900 in 2011, and for good reason - stormy markets steer investors to safe havens.

But gold's fortune has shifted in the past two years, and finishing 2013 down 28% seems to have sealed its fate - at least in the eyes of the short-term speculators. In reality, the same forces that are stabilizing stocks and suppressing gold are also the fundamental reasons long-term investors have been buying gold since the turn of the new millennium. The so-called recovery we're now experiencing is just a lull in a storm that hasn't yet abated.

From the fiscal cliff at the beginning of the year to the budget stalemate and government shutdown in the fall, the US was not exactly a model of financial stability in 2013. Yet with each of these stories, the markets shrugged off any large dips and went on to reach record high after record high. The stock market exceeded most expectations - the S&P and Dow rallied 29.6% and 26.5% respectively, with the volatility index staying remarkably low.

The official explanation for this market behavior is that the economy really is improving. A growing GDP and improving jobless rate are the leading economic indicators that support this conclusion.

However, the real reason behind 2013's stability in spite of mixed economic news was the extremely accommodating Federal Reserve policy. Markets have become hyper-aware of this Bernanke Put over the course of the year.

Compare the markets' taper tantrums earlier in the year to their reaction to the Fed's December announcement of "taper-lite."

In both June and August, with the mere talk of tapering, the S&P and Dow tumbled. The assumption was that when the Fed started tapering their Quantitative Easing (QE) program, interest rates would also start to rise. Overvalued stocks plunged in preparation for a higher interest rate environment.

However, this December, when the Fed set an official January date for tapering, these indices did not drop as they had before, but immediately jumped to new highs. Why the different reaction to essentially the same news?

Because the Fed's December announcement was not the same.

The key element of Bernanke's "taper-lite" was not the $10 billion-per-month cut to QE, but the explicit commitment to maintain low interest rates for the foreseeable future. Bernanke basically guaranteed the fed funds rate would remain near 0% for at least a couple more years.

This commitment to artificially suppressed interest rates ruins the charade that the economy is getting healthier. Why on earth does a healthy economy need the support of free money?

The short-term data may appear good on its face, but people are waking up to the bigger picture of this so-called recovery - namely that it isn't a recovery at all.

It's well-recognized now that most new jobs are low-wage, low-skilled placements. Often these are part-time or temporary retail or restaurant positions. This may be why both median income and the percentage of the population employed remain well below pre-crisis levels. The jobless rate has only improved because people have simply given up trying to find employment.

Meanwhile, the latest data from the Bureau of Economic Analysis shows that in the last months of 2013, personal spending rose more than personal income, while the savings rate dropped. In other words, we're back to digging the hole that caused the Panic of '08.

This is one of the longest and slowest recoveries the US has ever experienced, but the mantra of Wall Street maintains that all is well because the stock market is up. We're supposedly returning to normal.

The truth is that "normal" no longer means "healthy" when it comes to the economic stability of the United States. It really means that we are back to where we were prior to the Panic of '08.

Only a short-term mindset could ignore the parallels between our economy today and ten years ago. Heading into 2004, the headlines sounded almost identical to today's, with talk of an improving economy that still suffered from less-than-optimal employment numbers.

More importantly, it was in 2003 that Alan Greenspan cut the fed funds rate to 1% - the lowest it had been for more than 40 years.

We all know how that story ended. Most economists agree that the interest rate policy of Greenspan's Fed spurred the irresponsible lending practices and speculation that drove the US into a housing crash and then a financial meltdown.

Yet here we are again, with the fed funds rate at record low levels. Nothing has changed in ten years - the supposed recovery we're experiencing now is simply a product of this endless cheap money.

In times like these, long-term gold investors feel like the designated drivers in the corner of a frat party. It might seem like we're missing the fun, but we must remember that we're playing a different game than the short-term speculators.

Our drunken friends have had some cheap thrills in 2013, but this stock market growth rests on an unstable foundation of artificial stimulus and cheap money. We are more interested in waking up without a hangover, a wrecked car, or worse. The longer interest rates remain suppressed, the crazier markets will behave when rates rise. And if Greenspan's one year at 1% rates helped trigger the crash we saw in '08, imagine imagine what three years and counting of Bernanke's/Yellen's 0% rates portends for the next crash.