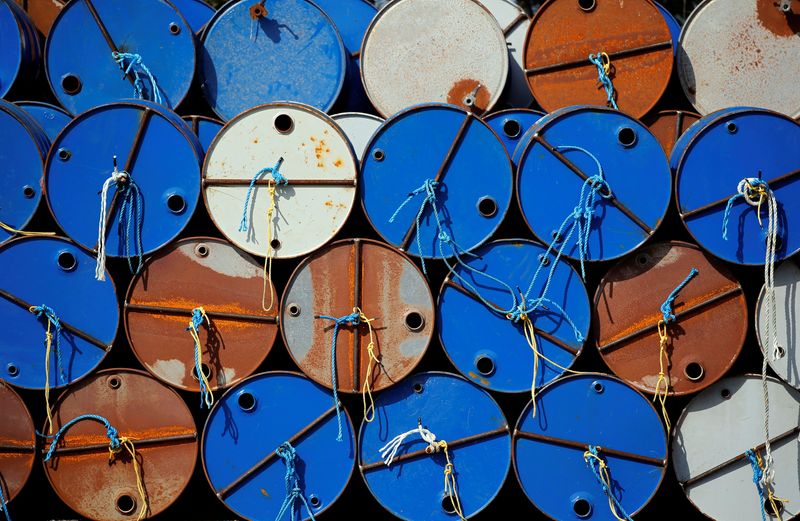 NEW YORK (Reuters) -Oil rose on Tuesday on expectations for a loosening of China's strict COVID-19 controls, but concerns that OPEC+ would keep its output unchanged at its upcoming meeting limited gains.

"The prospect of a return to normality, in an economy that is the world's largest oil importer, was enough to make oil prices jump in the first significant price rebound of the last two weeks," said ActivTrades analyst Ricardo Evangelista.

Rare street protests in cities across China over the weekend targeted President Xi Jinping's zero-COVID policy and were the strongest public defiance during his political career, China analysts said.

Weakness in the U.S. dollar, which tends to trade inversely with oil, also helped to boost crude prices. The dollar index has fallen to 106.65 from a 20-year high as investors look toward the Federal Reserve reaching a peak rate early next year with inflation pressures expected to ease.

"(The) strong rebound is being furthered by a weakening in the U.S. dollar and a need to discount some loss of Russian crude availability via next week's scheduled initiation of sanctions," said Jim Ritterbusch of Ritterbusch and Associates.

Oil prices, however, were hampered by concerns that the Organization of the Petroleum Exporting Countries and allies including Russia, a group known as OPEC+, would not adjust their output plans at their next meeting on Dec. 4.

The meeting, planned as an in-person gathering, may be made a partly or fully virtual event, sources said, which added to worries that a cut was not imminent.

OPEC+ started to lower its output target by 2 million barrels per day (bpd) in November, aiming to shore up oil prices.

Markets are also assessing the impact of a looming Western price cap on Russian oil.

Diplomats from the Group of Seven (G7) nations and the European Union have been discussing a cap on Russian oil between $65 and $70 a barrel, aiming to limit revenue to fund Moscow's military offensive in Ukraine without disrupting global oil markets.

However, EU governments on Monday failed to agree on the cap, with Poland insisting it should be set lower than the level proposed by the G7, diplomats said.

The price cap is due to come into effect on Dec. 5, and if there is no agreement, the EU is set to implement harsher measures agreed at the end of May - a ban on all Russian crude oil imports from Dec. 5 and on petroleum products from Feb. 5.