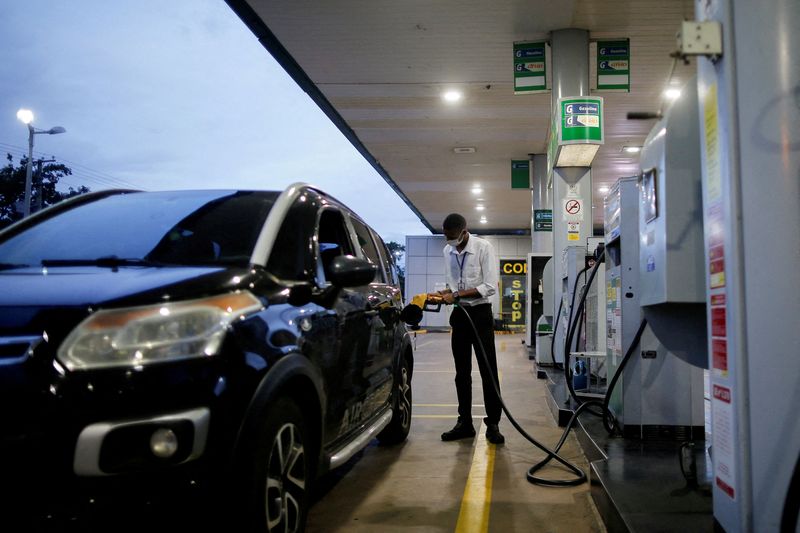 NEW YORK (Reuters) -Oil prices slid about 2% on Wednesday as a rise in U.S. gasoline and distillate inventories and worries about slower economic growth around the world offset ongoing concerns about tight crude supplies.

The Energy Information Administration (EIA) said U.S. crude inventories fell last week even as production hit its highest level since April 2020 during the first wave of the coronavirus pandemic. Fuel stocks rose as refiners ramped up activity, operating at 95% of capacity, the highest for this time of year in four years. [EIA/S]

"The EIA report put a damper on the market. The rise in gasoline and distillate inventories eases the pressure a bit and the uptick in U.S. production also factored into the price decline," said John Kilduff, partner at Again Capital LLC in New York.

Also putting pressure on oil was a rise in the U.S. dollar against a basket of other currencies to its highest since hitting a 19-year high in mid June. A stronger dollar makes oil more expensive for buyers using other currencies.

Brent and WTI gained about 7% over the prior three sessions on worries about tight supplies due in part to Western sanctions on Russia.

"Given that almost 1/5 of global oil producing capacity today is under some form of sanctions (Iran, Venezuela, Russia), we believed there is no practical way to keep these barrels out of a market that was already exceptionally tight," JP Morgan said in a research note.

The U.S. Federal Reserve will not let the economy slip into a "higher inflation regime" even if it means raising interest rates to levels that put growth at risk, Fed Chair Jerome Powell said.

The Organization of the Petroleum Exporting Countries (OPEC) and its allies such as Russia that form the OPEC+ group, began a series of two-day meetings on Wednesday with sources saying chances of a big policy change look unlikely this month.

Analysts are concerned that Saudi Arabia and the United Arab Emirates (UAE) may not have enough spare capacity to make up for lost Russian supply. French President Emmanuel Macron said this week he was told these producers will struggle to increase output further.

However, the UAE energy minister said the country, which is producing about 3 million bpd, has some spare capacity above its OPEC quota of 3.17 million bpd.